Delhi Hotel Fire: Emergency Doors Closed, Some Jumped Off Windows in Hurry | All You Need to Know

At least 17 people killed, 35 injured in a massive blaze that engulfed Karol Bagh's Arpit Palace Hotel in wee hours of Tuesday morning. Here's all you need to know.

Speaking to reporters, Alphons said that the Arpit Palace Hotel’s emergency doors are ‘very narrow’ and used to be locked every night, which in this case has proven to be fatal for 17 people, while injuring 35 others. Also Read - Delhi Fire Tragedy: Hotel Used 'Unauthorised' Fifth Floor as Rooftop Restaurant, Police Register FIR | Top Developments

While many of the victims were charred to death or suffocated in the poisonous fumes, at least three people were killed when they reportedly jumped off the building in desperate attempts to escape the blaze. Also Read - Man says suspects younger sister among Delhi hotel fire victims

“We just took a look at the emergency exits. It’s all illegal. These are very narrow, not according to specifications. And they were closed at night. According to information we have, those gates are closed at night and a guard sits outside. But we don’t know if the guard was there or not,” Alphons told reporters after surveying the area.

The fire started at around 3:30 am on Tuesday, catching a lot of guests unguarded in their sleep.  According to fire officer Vipin Kental, people were also unable to use the corridors for evacuation due to wooden panelling throughout. 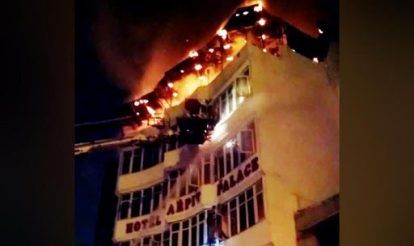 The cause of the fire is still unknown, but prima facie it seems, a short circuit could have led to the accident.

According to a PTI report, “As per information gathered from the site, it reveals that the incidence of fire started at second floor at around 3.30 AM on February 12 due to short-circuit,” a North Delhi Municipal Corporation official said.

There were 53 people in the 45-room budget hotel, which had a canopy on the terrace housing what appeared to be a restaurant, sources say.

Indicating another problem area, Sandip Khandelwal, president of the Delhi Hotel and Restaurants Owners Association, claimed fire tenders reached 15-20 minutes late because the area was barricaded for security purposes at night and fire tenders had to take a longer route to reach the hotel.

Prime Minister Narendra Modi was among those who condoled the loss of lives.

Deeply saddened by the loss of lives due to a fire at Karol Bagh in Delhi.

I convey my condolences to the families of those who lost their lives.

While Delhi Health Minsiter Satyendra Jain was among the first to reach the spot, where he took stock of the situation and ordered the district magistrate to investigate the matter.

Soon after, Delhi Chief Minister Arvind Kejriwal announced Rs 5 lakh compensation for the next of kin of those killed. “It is a very tragic incident. It seems that there may have been some lapses. A magisterial probe has been ordered to investigate the cause of the incident,” he said while addressing the media.