On Tuesday, the death toll in the riots climbed to 13 while the number of those injured crossed 150. Also, Union Home Minister Amit Shah held a high-level meeting, the third in less than 24 hours, in connection with the violence. 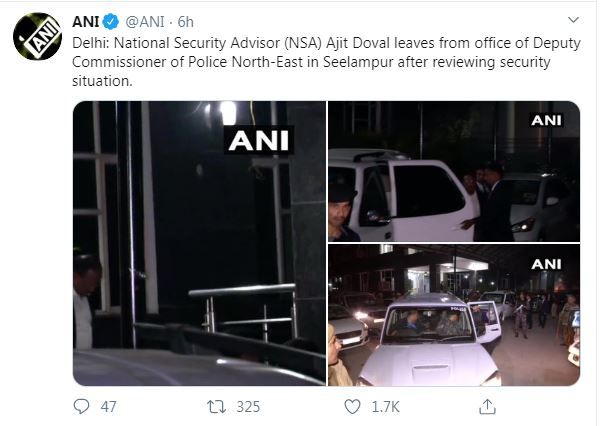 Earlier, the NSA held a review meeting at the office of the Deputy Commissioner of Police (DCP) North-East at Seelampur, one of the riot-hit areas. Also present at the meeting was newly-appointed Special Commissioner of Delhi Police (Law and Order) SK Shrivastava, who was brought in late last night to control the situation that was spiralling out of control rapidly. Also Read - CBSE Postpones Class 10, 12 Board Exams Scheduled For Feb 26 in North East Delhi

At the meeting, the NSA reviewed security arrangements, deployment of police personnel in northeast Delhi and discussed ways to restore normalcy in the region. Then, accompanied by top officers of the Delhi Police, he then visited Jaffrabad, Seelampur, Maujpur and Gokulpuri Chowk to review the situation. Later, he returned to the office of DCP North-East.

NSA Doval’s visit came even as Union Home Minister Amit Shah held a high-level meeting, the third in less than 24 hours, in connection with the violence.

Late last night, shoot at sight orders were issued in northeast Delhi even as Section 144 was imposed throughout the region. Women protesting under the Jaffrabad Metro station, too, were evicted from the protest site. The developments came on a day death toll increased to 13 with the number of those injured crossing 150.

Notably, the violence coincided with the first state visit to India by US President Donald Trump. Last evening, on the second and final day of his state visit, Trump said that while he discussed religious freedom with PM Narendra Modi and was aware of the Delhi violence, it was India’s internal matter to deal with.