NSA Ajit Doval has been handed responsibility to bring law and order situation in the capital under control.

New Delhi: One more person died at the Guru Teg Bahadur (GTB) Hospital, taking the number of deaths in the national capital, due to the ongoing communal violence in northeast Delhi, to 28. Also Read - Four 'Hate Speeches' of BJP Leaders Rolled in Delhi High Court 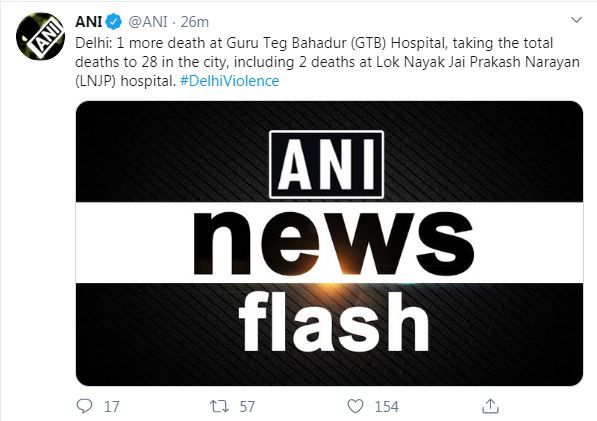 Late Wednesday night, reports of fresh violence emerged from Bhajanpura, Karawal Nagar and Maujpur after a relative calm prevailed throughout the day.

Earlier, National Security Advisor (NSA) Ajit Doval, who was put in charge of the capital’s law and order, on Wednesday visited the riot-hit areas to instill confidence among the people. Prime Minister Narendra Modi, too, had broken his silence on the issue, appealing to the citizens of Delhi to maintain peace and brotherhood at all times and assuring them that the police and other agencies were working on the ground to restore normalcy at the earliest.

The Delhi Police, which has come under intense scrutiny for not being able to control the violence, has registered 18 FIRs thus far and arrested 106 people in connection with the violence. Union Home Minister Amit Shah, to whom the Delhi Police reports, and who himself has come under the scanner for not being able to quell the violence, too, is said to have held multiple meetings to review the security situation in the capital.

The violence began with a faceoff between pro- and anti-CAA groups on Sunday and took a communal turn a day later. It escalated on Tuesday with reports of even journalists being attacked coming in.