Expressing 'grave concern' over the violence, the USCIRF, on Wednesday, had called on the government to provide protection to people 'regardless of their faith.'

Expressing ‘grave concern’ over the violence, the USCIRF, on Wednesday, had called on the government to provide protection to people ‘regardless of their faith.’ It had called ‘greatly disturbing,’ the reported attacks against Muslims, their homes and shops, and their houses of worship. Also Read - 'Failure of Leadership': Bernie Sanders Slams Trump For His Response on Delhi Violence During India Visit

Reacting to it, the MEA, in a statement, today said, “We have seen comments made by the USCIRF, sections of media and a few individuals on the recent incidents of violence in Delhi. These are factually inaccurate and misleading, and appear to be aimed at politicising the issue.” Also Read - 'UN Secretary-General Saddened by Reports of Casualties in Delhi, Following Situation Closely,' Says Spokesperson 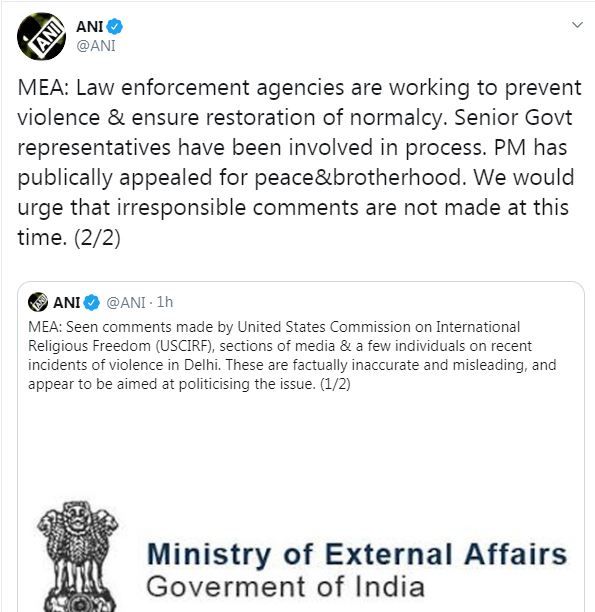 “Law enforcement agencies are working to prevent violence and ensure the restoration of normalcy. Senior government representatives have been involved in the process. PM has publically appealed for peace and brotherhood. We would urge that irresponsible comments are not made at this time,” the statement added.

Over 30 people have died in the violence that began as a clash between pro and anti-CAA protesters in Maujpur on Sunday. The clash turned into a full-fledged riot on Monday and continued on Tuesday. On Wednesday, which witnessed relative calm, the Prime Minister made his first comments on the situation and deployed National Security Advisor (NSA) Ajit Doval to restore law and order in the national capital.