Shah has come under fire for his failure in controlling the riots in northeast Delhi, in which over 40 people have lost their lives. NSA Ajit Doval was given the charge to restore law and order in the national capital.

Speaking to the media in Bhubaneswar, where she will be among the four Chief Ministers to attend the Eastern Zonal Council (EZC) meet to be chaired by Shah, the West Bengal Chief Minister said, “Right now, the problem should be solved, political discussions can take place later.” Also Read - Mamata Urges PM Modi to Release Central Funds For West Bengal, Expresses Concern Over Its Delay 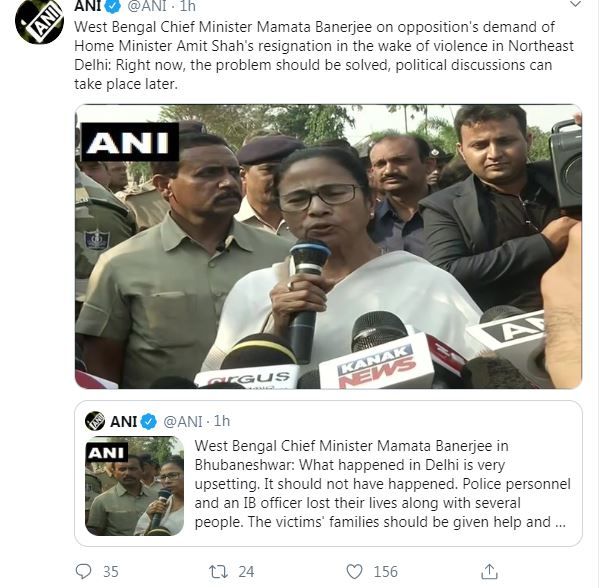 More than 40 people have been killed and over 200 injured in the violence, which began as a clash between pro- and anti-Citizenship Amendment Act (CAA) protesters on Sunday but turned into full-blown communal violence on Monday and continued on Tuesday. The situation, however, has been peaceful since Wednesday after National Security Advisor (NSA) Ajit Doval, who was given the responsibility to restore law and order in the city, visited riot-hit areas on Wednesday.

The opposition has also questioned the logic of Shah continuing as the Home Minister when no less than the NSA himself had to be called up to bring peace in the affected areas.

Calling the riots ‘upsetting’ and ‘something that should have never happened, she further said, “Police personnel and an Intelligence Bureau officer lost their lives along with several people. The victims’ families should be given help and peace should return.”

Notably, Intelligence Bureau (IB) staffer Ankit Sharma and Delhi Police head constable Ratan Lal are among those to have been killed during the violence.