Twenty-year-old Maksood was killed by a white tiger at the National Zoological Park. 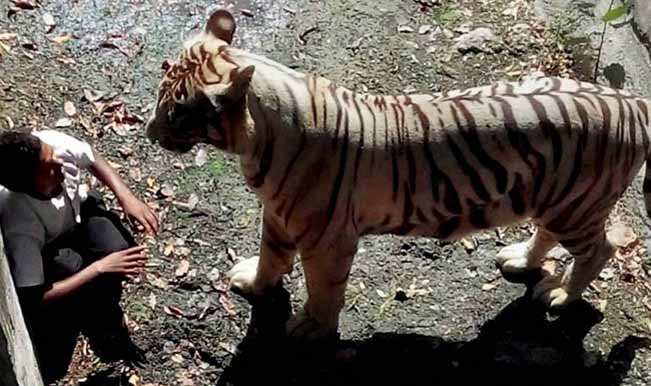 New Delhi, Sep 24: The family of the 20-year-old youth who was mauled to death by a white tiger at the Delhi zoo, Wednesday demanded strict action against the security guards who “did not act” when the victim fell into the enclosure. “My son was not at fault. It should be investigated whether he jumped or was pushed into the enclosure. But the security guards posted at that time should have acted,” Mehfooj, father of Maksood who was killed by the tiger Tuesday, told IANS. Also Read - 'Shocked' over irregularities in Delhi zoo, CZA blames environment ministry for 'no action'

“The tiger was standing in front of him (Maksood) for more than 10 minutes. It was a long period of time in which the zoo staff could have saved my son,” he said. Police should investigate the case and put such people behind bars, he added. Mehfooj is a labourer and lives in Delhi’s Anand Parbat area with his family.

The Delhi zoo authorities, however, refuted his claims and said the guard posted at the enclosure tried to stop the youth twice. “But Maksood crossed the stand-off barriers when the guard was not looking. He then jumped into the enclosure,” said R.A. Khan, curator of the National Zoological Park.

Khan also alleged that Maksood was drunk at the time. Police told IANS they were waiting for the post-mortem report, expected in a day or two. “We have registered a case under section 304 A (causing death by negligence) against unknown people. Our probe is on,” said a police officer.

Videos recorded by other visitors on their mobile phones also showed that Maksood was crouching against the wall for a few minutes while the tiger stood in front of him.