Delta Plus Variant in Kerala: What You Should Know

Delta Plus Variant in Kerala: Union Health Secretary Rajesh Bhushan issued a separate letter to Kerala to ensure “more focused and stringent” Public Health Response and give timely inputs regarding the same.

Kochi: The southern state of Kerala has so far reported three cases of the new Delta Plus variant of coronavirus –the strain which the Central government has classified as a “Variant of Concern”. On Monday, Kerala reported its first case where a COVID-19 patient has been infected with the Delta-plus variant of SARS-CoV-2. As per a report by The Hindu, a four-year-old boy from Kadapra Panchayat in Pathanamthitta has been detected with the variant. The boy tested positive for COVID-19 on May 24 and is presently recovered from the infection, but the Delta Plus variant was confirmed in him during a genome sequencing of his sample, carried out at the CSIR-IGIB in New Delhi. Meanwhile, the other two cases were reported from the Palakkad district of the state.Also Read - COVID Symptoms? Follow These Measures Immediately For Quick Recovery And Help Others From Getting Infected

Earlier on Wednesday (June 23), Union Health Secretary Rajesh Bhushan issued a separate letter to Kerala to ensure “more focused and stringent” Public Health Response and give timely inputs regarding the same. He has also written separately to the chief secretaries of Madhya Pradesh, and Maharashtra, requesting them to take up immediate containment measures in the districts where the Delta Plus variant, categorized as a ‘Variant of Concern’, has been detected. Also Read - Tip Tip Barsa Paani...! 6 Most Romantic Places In India For Perfect Honeymoon During Monsoons

Read the letter issued to the chief secretary of Kerala here: 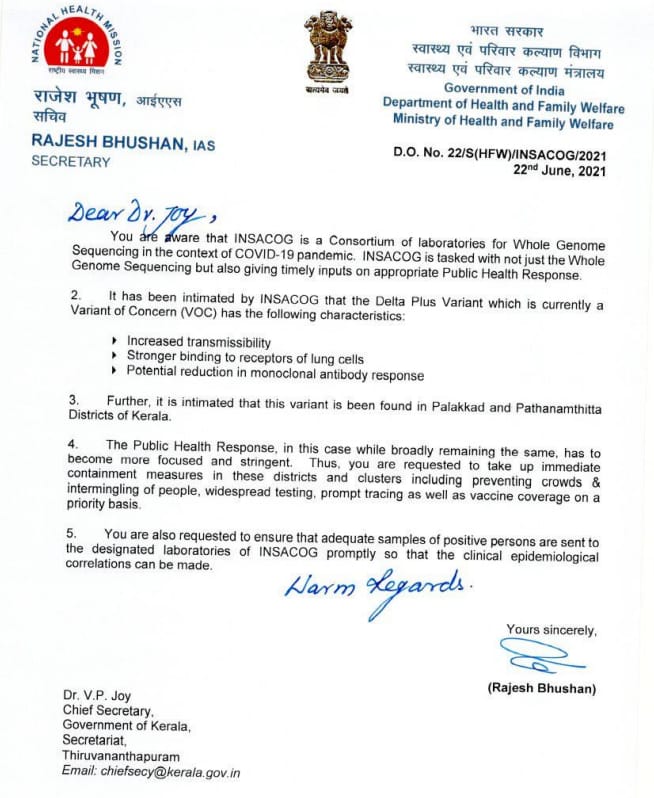 Earlier in the day, the Union Health Ministry informed that around 40 cases of the Delta plus variant have been detected sporadically in Maharashtra, Kerala, and Madhya Pradesh on Wednesday. A total of 21 cases of the new strain have been found in Maharashtra, six in Madhya Pradesh, three each in Kerala and Tamil Nadu, two in Karnataka and one each in Punjab, Andhra Pradesh and Jammu, said sources. Delta variant as well as all Delta sub-lineages including Delta plus are classified as VOC, it said.

“As of now among the samples sequenced (45000+) in India, Delta plus variant — AY.1 –has been observed sporadically in Maharashtra, Kerala, and Madhya Pradesh, with around 40 cases identified so far and no significant increase in prevalence,” the ministry said in its statement. These three states have been advised to strengthen surveillance and take appropriate public health measures.

Delta Plus cases, still a low number, are emerging as large parts of India are ending severe lockdowns and restrictions with Covid cases on the decline after a fierce second wave ambushed the nation’s health infrastructure in April-May.

INSACOG (Indian SARS-CoV-2 Genomic Consortia), a consortium of 28 labs tasked with genome sequencing of the virus causing Covid, says properties of the Delta Plus are still being investigated. It is characterized by a mutation in the spike protein, which helps the virus gain entry into human cells.

“Currently the number of such Delta plus variants in India are only a few but the distribution or detection in various states during past two months indicate that it is already present in some states and states may need to enhance their public health response by focusing on surveillance, enhanced testing, quick contact-tracing and priority vaccination,” it says.

Very little is known about this strain, which is now in nine countries — the US, the UK, Portugal, Switzerland, Japan, Poland, Russia, and China besides India. According to the government, the Delta Plus, much like the Delta strain that has spread to 80 countries, is highly infectious and fast-spreading. According to INSACOG, the Delta Plus shows “increased transmissibility, stronger binding to receptors of lung cells and potentially reduced monoclonal antibody response”.

It may also show resistance to the existing treatment protocol for Covid, experts worry. There are concerns over whether current vaccines will be effective against Delta Plus. The government said while the two vaccines being used in India, the Serum Institute of India’s Covishield and Bharat Biotech’s Covaxin, are effective against the Delta variant, data on how they work on the Delta Plus would be shared later.

(With Inputs from Agencies)