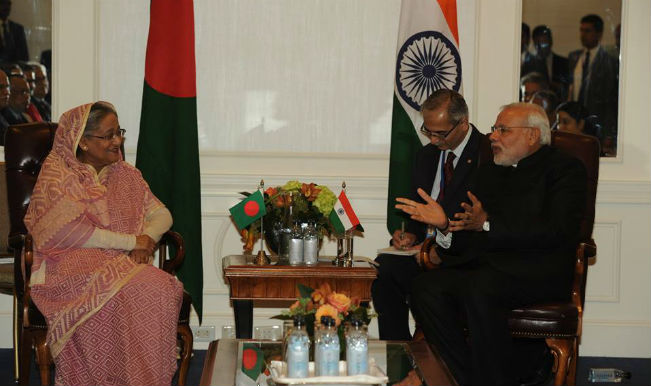 In contrast to these encounters, speaking barely an hour earlier at the UN, Modi said he was prepared for serious bilateral dialogue with Pakistan “in a peaceful atmosphere, without the shadow of terrorism” but raising issues at the General Assembly will “derail efforts to resolve the issues.” On Friday, Pakistan Prime Minister Nawaz Sharif had raised the Kashmir issue reiterating a demand for a plebiscite and saying it was a responsibility of the international community to see it through. Also Read - Outrage in Pakistan After Robbers Gang-Rape Woman in Front of Her 3 Children in Punjab Province

Several common regional topics came up in the separate meetings Modi had with Sri Lanka President Mahinda Rajpaksa and Prime Ministers Sheikh Hasina of Bangladesh and Sushil Koirala of Nepal. They told Modi in their personal meetings with him at his hotel that they were looking forward to his visits to their countries, Akbaruddin said, and Modi told them his priority is “neighbours first” and that he was working on finding convenient dates to visit them.

Nepal is hosting the SAARC summit in November, when Modi would be making his second visit there as prime minister, and Koirala asked for logistical support for it. Modi assured him assistance.

While discussing common SAARC projects, the three leaders complimented India on the success of the Mars mission and said they looked forward to looked forward to the SAARC satellite project that the prime minister had announced in June. The satellite he asked Indian scientists to design a satellite to provide free services to SAARC countries, calling it India’s gift to the neighbors. Modi’s proposal for an International Yoga Day was supported by all the three leaders and Sri Lanka formally endorsed it in writing.

This was Modi’s first meeting with Sheikh Hasina, who could not attend Modi’s swearing-in like the other leaders because she was in Japan on a prior commitment. Hasina brought up the issue of a treaty between the two countries on Teesta River and the land border agreement, which are pending. Modi told her that on the land border agreement a bill is with a select committee of parliament and members of the new Lok Sabha are being apprised of it and that he was committed to moving it forward.

On Teesta, he said waters were a crucial issue and a consensus needed to be developed while it was being worked on waters were flowing unimpeded to Bangaldesh, according to Akbaruddin.

Another topic was land connectivity between Bangladesh and India. Modi thanked Sheikh Hasina for allowing transportation of foodgrains through Bangladesh to India’s Northeastern states, the spokesman said. She told him that because of the nature of relations between the two countries, Dhaka could not have refused a humanitarian request like this. She said if the transport of foodgrains needed to be done on a regular basis, the infrastructure needs to be improved. Modi, replied that if there were any infrastructure projects needed to be developed, India would be willing to look into them.

With Rajapaksa, the spokesman said, they discussed development projects that India was helping in. Akbaruddin said that the understanding was that Sampur power project has received clearance and environmental clearances are underway. India’s National Thermal Power Corporation and Ceylon Electricity Board had signed an agreement in 2011 for the 500 megawatt thermal power project costing Rs. 4,000 crore, but it has yet to take off.

Turning to the ethnic issue in Sri Lanka, which has echoes across the Palk Straits, Modi told Rajapaksa that he told Tamil National Alliance, which met him in August, that dialogue is the best way to reconcile the differences they may have with the Sri Lankan government.

On the issue of 76 Indian fishermen in Sri Lankan custody, Modi told Rajapaksa that it was a humanitarian issue that needs to be dealt with sensitivity, Akbaruddin said. Sri Lanka said that both sides need to work on finding a long-term solution and mentioned it also had an environmental dimension.

Suresh Koirala spoke to Modi about the power trading and power generation agreements reached during Modi’s visit to Nepal two months ago. Modi sought to fastrack the 900-megawatt hydropower project on Nepal’s Karnali River and last week Indian infrastructure giant GMR and Kathmandu signed and agreement. Nepal has approved the other one, a power sharing agreement and is in the final stages of implementation.