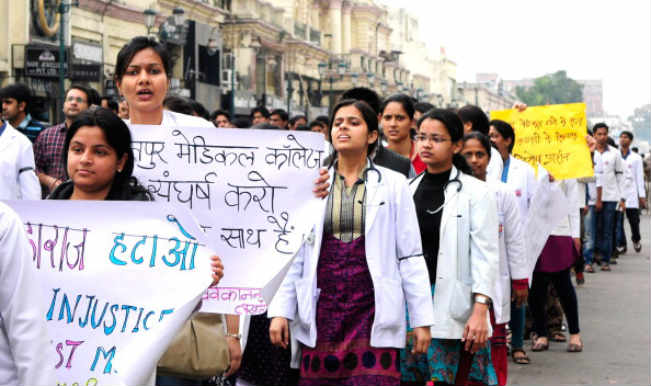 Darbhanga(Bihar), Sept 21: About 200 junior doctors of Darbhanga Medical College and Hospital (DMCH) have launched an indefinite strike in protest against frequent attack on them by kins of patients, a junior doctors association officer bearer said today. “We have gone on indefinite strike since last night in protest against attack on our colleagues by kins of a patient, DMCH Junior Doctors Association president Dr. Kunal said.

He said that the agitating junior medicos will not resume duty till adequate security was provided to them by the district administration. The DMCH Superintendent Dr Shankar Jha said that he was aware about the ongoing indefinitely strike by the junior doctors and arrangements have been made to ensure uninterrupted health service to patients by distributing additional works among the senior medicos.

Jha said that he has apprised the district administration about the agitating junior medicos’ demand for security. The kins of a patient Triloki Prasad Singh had clashed with the junior doctors late last night alleging negligence in his treatment after he was brought in serious condition from Saharsa and admitted to the Intensive Care Unit (ICU) at the DMCH.