Donald Trump birthday: Hindu Sena to cut cake for the ‘saviour of humanity’ at Jantar Mantar

The birthday celebration at Jantar Mantar will have a photo exhibition featuring the days of Donald Trump since his childhood.

New Delhi, June 14: A little-known group that goes by the name Hindu Sena and that calls the President of the United States Donald Trump as the ‘saviour of humanity’ will celebrate his 71st birthday on Wednesday with cake cutting and ‘raj tilak’ at Jantar Mantar, Delhi. The right-wing organisation held similar celebration last year on Donald Trump’s 70th birthday. Donald Trump was born on June 14, and he celebrates his 71st birthday, today. Also Read - Donald Trump Seen Singing & Selling Ice-Cream in Pakistan; Oh Wait, That's His Doppelganger | Watch

The event will begin with a “raj tilak” ceremony followed by cutting of a cake weighing 7 kg and 100 grams. The birthday celebration at Jantar Mantar will have a photo exhibition featuring the days of Donald Trump since his childhood. The poster inviting people to the celebration features Donald Trump’s childhood and current picture surrounded by balloons. The Hindu Sena sent the poster of the event on WhatsApp and on other social media platforms inviting people to attend the 71st birthday celebration of their ‘saviour of humanity’, Donald Trump. Also Read - Good News For H1-B Visa Seekers: US Drops Barriers To Legal Immigration

Posting the poster on Twitter, Hindu Sena president Vishnu Gupta said, “I’d like to invite you all for Birthday Celebration of our beloved Mr. @realDonaldTrump President of #USA & Saviour of Humanity on 14/06/17 (sic).” Also Read - Facebook Suspends Donald Trump's Account for Two Years 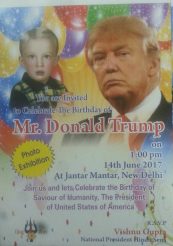 “The event will be much bigger than (the one in) 2016. This time we have planned to organise a photo exhibition depicting successful journey of Mr Donald Trump during last five years,” President of Hindu Sena Vishnu Gupta told TOI.

“Donald Trump is my hero; we will celebrate his birthday with much fanfare and pray for his long life. A cake weighing 7 kg and 100 grams will be cut in the function signifying his 71st birthday,” said Vishnu Gupta, President of Hindu Sena, Indian Express reported. Last year. Hindu Sena held a celebration with much fanfare and had even cut a birthday cake for him when he was the US President nominee from Republican Party.

The Hindu Sena had also organised a ‘havan’ for Donald Trump when he was the President nominee praying for his success in the US presidential elections. Members of the group say they are inspired by the US President’s hard stand against the Islamic terror. On the Modi-Trump meeting on June 26, Gupta said, “I have lot of hopes from the Modi-Trump meeting. I am sure both the nations will benefit from the meeting,”