In a tweet, Randeep Singh Surjewala wondered if the officer played a possible role in the 2001 Parliament Attack as well as last February's Pulwama Attack. The DSP was on Saturday caught travelling with two Hizbul Mujahideen (HM) terrorists in his car on the Srinagar-Jammu Highway en route to Delhi.

New Delhi: Congress on Monday alleged that there was a ‘bigger conspiracy’ after a top Jammu and Kashmir Police (JKP) officer was on Saturday caught travelling with two Hizbul Mujahideen (HM) terrorists in his car on the Srinagar-Jammu Highway en route to Delhi. Also Read - Top J&K Cop Caught Ferrying Two Hizbul Terrorists To Be Treated As 'Terrorist'

Deputy Superintendent of Police (DSP) Davinder Singh was arrested along with HM terrorists Naveed Babu and Arif. A recipient of the President’s medal of gallantry Independence Day last, he was posted at the sensitive Srinagar International Airport. Two AK-47 rifles were discovered from a car, followed by the discovery of another AK-47 rifle and two pistols from his Srinagar residence in a subsequent raid. Also Read - Top J&K Cop Arrested With Two Hizbul Terrorists in His Car, Was on Way to Delhi

On Monday, Randeep Singh Surjewala, the Congress’ chief spokesperson tweeted: “Who is Davinder Singh? What’s his role in the 2001 Parliament Attack? What’s his role in Pulwama Attack, where he was Dy SP DR? Was he carrying Hizbul terrorists on his own or is he only a pawn, as master conspirators are elsewhere?” 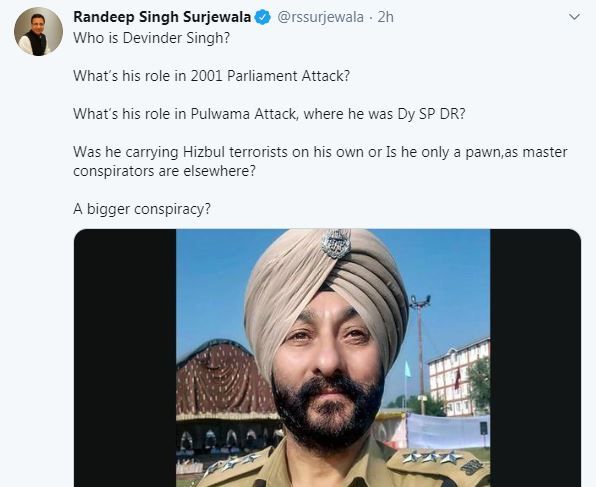 The DSP, who recently also received the 15 foreign envoys who were taken to a tour of Kashmir, was accused by Parliament Attack convict Afzal Guru of asking him to accompany another accused to Delhi and arrange his stay there. That accused, later, was one of the terrorists who attacked the Parliament complex on December 13, 2001, and was shot dead by the security forces. Guru, who was hanged on February 9, 2013, for his role in the attack, had also accused the officer of torturing him in a camp.

The officer was also posted in Pulwama last year, when, and where, in a suicide attack carried out by a Jaish-e-Mohammed (JeM) terorrist, over 40 Central Reserve Police Force (CRPF) personnel were martyred.

The JKP has booked DSP Singh under the Unlawful Activity Act and said that he’d be tried as a terrorist.