A major earthquake rattled various parts of North India with the epicentre in Nepal on Saturday afternoon. Stay tuned for latest news on the earthquake in Nepal and Northern India. 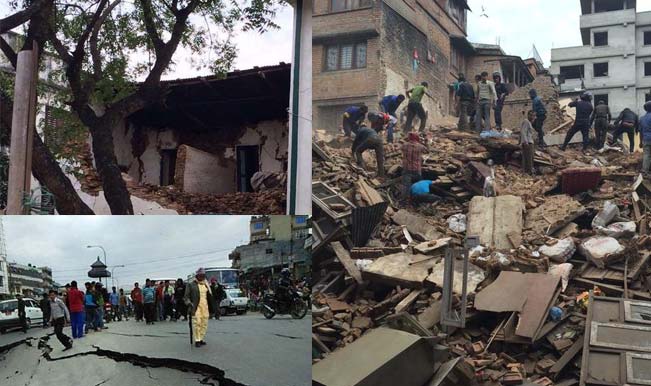 Also Read - West Bengal Schools, Colleges Not to Reopen on November 15. Here's Why

11.45 pm update: More than 1,500 were killed and thousands injured in Lamjung earthquake that hit the capital city of Nepal, Kathmandu. The quake which lasted 20 seconds sent strong aftershocks that caused destruction in Nepal and large parts of India. Two Indians lost their lives in Nepal when the reports last came in. NDRF teams and Indian Army are braving all the odd circumstances to bring back tourists safely in India. The evacuation programme is on full throttle in both India and Nepal. This is for today. We bring to you more live news and updates, tommorrow. Catch this space for latest news on Nepal earthquake. Also Read - Go For Online Shopping, Avoid Travel: Centre Issues COVID Advisory to States Ahead of Festivals

11.00 pm update: The Air Indian Airforce (IAF) aircraft brought back 55 Indian nationals including four infants in Delhi from the earthquake-hit Nepal. Other than IAF aircraft– C-130J, two other aircrafts — IL-76 and C-17 — were also sent to ferry Indian nationals stuck in Kathmandu. Also Read - Third Wave of Corona In India: Experts Warn Against Complacency Ahead of Diwali | Deets Inside

10.00 pm update: Mild tremors in were also felt in Himachal Pradesh but no loss of lives and damage to property were reported in the state as an earthquake measuring 7.9 on Richter Scale hit Nepal. An Indian Air Force (IAF) aircraft- C130-J, evacuated number of Indians stranded in Nepal; the arrival of the aircraft is expected shortly.

7:00 pm update: Over 20 aftershocks cause further damage in Nepal and death toll nears 900, according to reports. A state of emergency has been declared in the kingdom nation.

5: 00 pm update: As an earthquake measuring 7.9 on the Richter scale hit Nepal at 11.41 a.m. on Saturday, the climbers on Mount Everest kept tweeting to apprise well-wishers about their situation.

4: 40 pm update: People rushed out of homes and schools while offices were vacated and metro rail services were halted when a high intensity earthquake hit Kolkata and parts of Bengal on Saturday.

4: 30 pm update: As many as 500 people were killed in a major earthquake that rocked Nepal on Saturday, a Nepalese official said.

4: 15 pm update: Flight services to Kathmandu were today cancelled or put on hold following the closure of airport there after a powerful earthquake rocked central part of the Himalyan country.

4.00 pm update: Home Minister Rajnath Singh has pledged that India will offer full support to Nepal. Rajnath also said there were reports of 10-12 casualties in few states but are awaiting confirmation. There are also reports of damage to the property. Prime Minister Narendra Modi spoke to Nepal PM Sushil Koirala, assuring him all help.

3.30 pm update: Delhi Chief Minister Arvind Kejriwal has asked the residents to be calm as tremors of Nepal earthquake continue to wreck havoc in norther region of India. “Earthquake tremors in Delhi. I appeal to people to maintain calm. Officials out in the field to assess the situation,” Kejriwal tweeted.

3.15 pm update: More than 10 National Disaster Response Force (NDRF) teams have been sent to Nepal as per the latest reports. The aftershocks continue to rattle Nepal and northern states in India. As per the Ministry of Home Affairs, Nepal, so far 150 people have been declared dead.

One of my friend from #Kathmandu #Nepal send me this picture #earthquake http://t.co/ib4nK78TJK pic.twitter.com/0kP8DbKGUT

3.00 pm update: Prime Minister Narendra Modi to take stock of the situation in a high-level meeting with ministers. Modi also held talks with CMs of Bihar, Sikkim, Uttar Pradesh, Madhya Pradesh, and West Bengal in the wake of the situation arising due to the earthquake in Nepal.

2.45 pm update: Aftershocks of Nepal earthquake were in Visakhapatnam, Krishna, East Godavari, West Godavari, Srikakulam districts earlier today. The latest reports say that there is no news of any loss of life or damage to property. Aftershocks in state of Bihar, Rajasthan, Maharashtra and Uttar Pradesh may continue as reports suggests that the earthquake in Lamjung is the worst earthquake in eight decades. (Also read: Bihar earthquake latest update: Tremors shake Patna, Gaya, Nalanda, Buxar and Purnia as quake jolts Nepal)

2.30 pm update: Nepal earthquake’s aftershocks felt in Mumbai and Nagpur too. Magnitude of 2.8 on Richter scale tremors hit state of Maharashtra. Indian Army Team on a cleaning mission is safe in Nepal. An unit of Indian Army is heading on a expedition towards Mt Everest as tremors jolt the city of Lamjung. (Also read: Earthquake in Nepal, northern India update: Mild tremors felt in Nagpur, Mumbai too; Richter Scale 2.8)

Here’s what to do during an #earthquake! pic.twitter.com/q95LwOUUOR

2.15 pm update: Three killed in Bihar, two in Uttar Pradesh in earthquake that wrecked havoc in Nepal and northern India as per the latest reports. The earthquake in Lamjung has has triggered landslides in Sikkim. Five NDRF teams have been rushed to north Bihar districts of Supaul, Madhepura, Darbhanga, Madhubani, Sitamarhi. (Also read: Earthquake in Nepal: Hundreds trapped as iconic Bhimsen Tower collapses)

2.00 pm update: Some glimpses of the the havoc left by twin-earthquakes in Nepal, West Bengal, Bihar, Rajasthan. The below tweets sum up the entire devastation caused by the earthquake in Lamjung, Nepal. Find the helpline numbers of the disaster management teams below. Casualties reported in India as well. Two die as roof collapses in Bihar.

1.45 pm update: Home Minister Rajnath Singh says there is no preliminary report of damage anywhere in India due to earthquake in Nepal. In Bangaldesh, some 40 workers were reportedly injured in a stampede while trying to escape from their factories. (Also read: Monitoring situation after earthquake: Mamata Banerjee)

1.00 pm update: Dozens of people with injuries were being brought to the main hospital in central Kathmandu. There was no immediate estimate on fatalities. States of Jharkhand, Bihar, Sikkim and West Bengal also felt the tremors of the earthquake.

A major earthquake rattled various parts of North India with the epicentre in Nepal on Saturday afternoon. Places including Delhi, Jaipur, Ranchi, Uttar Pradesh and Nepal experienced the natural disaster. The earthquake was of 7.5 magnitude on Richter scale lasting upto 60 seconds in various parts. Services of the Metro in Delhi and Kolkata were temporarily halted. There was a lot of panic following the tremors but no damage has been reported so far. According to reports, tremors were also felt in Kochi and other parts of Kerala.