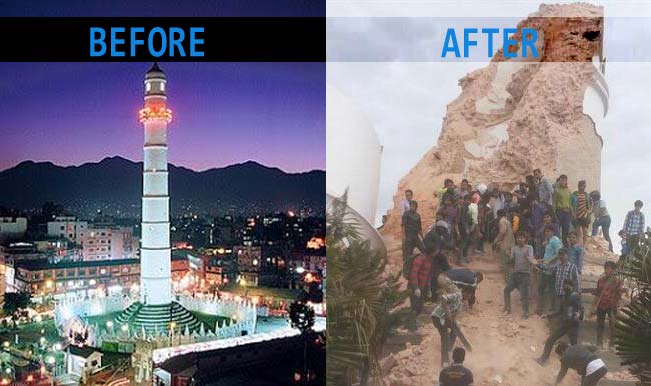 It was a nine storey tall tower at the center of Sundhara, Kathmandu. It was located in the city of Kathmandu, and is a part of Architecture of Kathmandu recognized by UNESCO.  According to the India Meteorological Department, the depth of earthquake was 10 km and measured 6 on the Richter scale in India. (READ: Earthquake in Nepal and Northern India Live News Updates) Also Read - Breaking: 6.1 Magnitude Earthquake Strikes Tokyo, Tremors Felt Across Japan

The US Geological Survey said the epicentre was at Lamjung in Nepal – a district some 75 km northwest of capital Kathmandu. Indian Prime Minister Narendra Modi tweeted: “News has come in about an Earthquake in Nepal. Several parts of India also experienced tremors.” He said that they were in the process of finding more information and “are working to reach out to those affected, both at home & in Nepal”. (Earthquake in Nepal and Northern India 2015: Photographs go viral on Facebook and Twitter)

Reports from across north India said people scurried out of their homes and offices even as buildings shook due to the quake and the strong aftershocks. The tremors were so strong that people feared for their lives. Some of them began to pray and tried to get as far away as possible from the buildings. Most ran to open grounds. Many of the high-rises saw people evacuate in large numbers. There was panic in Nepal which bore the brunt of the massive temblor. Besides capital Kathmandu and Besisahar in Lamjung, the cities which were affected include Bharatpur, Pokhara and Kirtipur. (With inputs from IANS/Image Credits-Twitter)