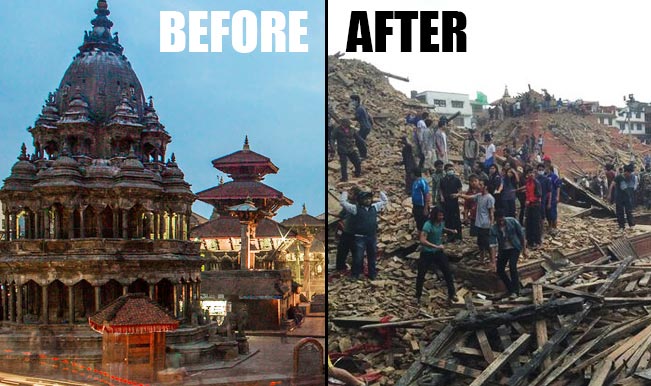 Nepal: Patan Durbar Square in Kathmandu was completely devastated in the 7.7 magnitude in Nepal. Dharahara which is also called Bhimsen Tower was also devastated in the major earthquake in Nepal on Saturday.  At least four people were killed and several were injured when a huge earthquake shook Nepal and caused widespread devastation on Saturday. One person was killed when an old building collapsed in the premises of the Indian consulate here when the earthquake shook the country on Saturday. The dead person was a Nepalese national, according to a journalist based here. (READ: Earthquake in Nepal and Northern India Live News Updates) Also Read - Afghans Bury Dead, Dig for Survivors of Devastating Quake

Xinhua news agency reported that at least three people were confirmed killed and two others were injured. Different buildings, including the walls surrounding Nepal’s royal palace, collapsed. The strong earthquake shook buildings in the capital, and more casualties are feared.  The quake was felt in India, Malaysia and Bangladesh. (READ-Earthquake in Nepal: Hundreds trapped as iconic Bhimsen Tower collapses) Also Read - Survivors Dig by Hand after Afghanistan Earthquake Killing 1,000

Major devastation took place in the old area of the national capital. According to information available, there was devastation in Hanmandhoka area in the old area of Kathmandu. Several casualties were feared as buildings collapsed. Authorities said they were still trying to assess the situation. Images that were tweeted showed the extent of damage caused to the buildings. There was rubble where the buildings once stood. In at least one case, there was a long and wide crack on a metalled road. (READ-Earthquake rocks North India, Nepal; 7.5 magnitude tremor rattles Kathmandu Valley)

Initial reports indicated that telephone connectivity was snapped in and around Lamjung, which was near the epicentre of the quake that measured 7.5 on the Richter scale, later revised to 7.9 by USGS. Half an hour later, another earthquake measuring 6.6 on the Richter scale hit 49 km east of Lamjung. (With inputs from IANS/Image Credits-Twitter)