The prayers passed off peacefully in the Valley barring an incident of stone-pelting at Safa Kadal. 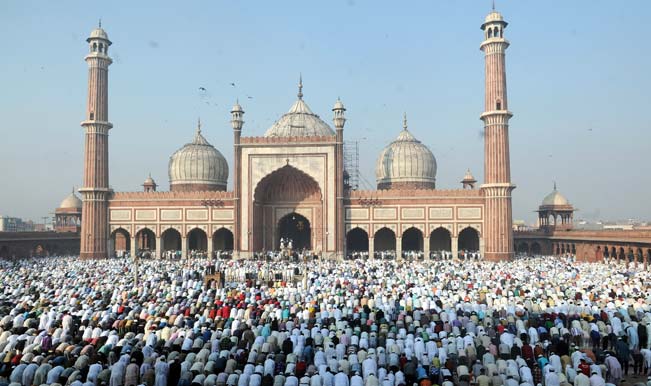 New Delhi, Oct 6 :  Lakhs of Muslims thronged mosques and Eidgahs today to offer prayers as mass animal sacrifices, piety and spirit of brotherhood marked Eid-ul-Zuha which was celebrated across the country with traditional fervour. The celebrations were, however, a low-key affair in Jammu and Kashmir which is recovering from the losses of last month’s devastating floods, with people observing austerity and many locals deciding to refrain from loud festivities. Also Read - Major Crackdown: No Passport Security Clearance & Govt Jobs to Stone Pelters in J&K

Muslims rededicated themselves to Islamic tenets of love and piety to mark the Festival of Sacrifice which commemorates the willingness of Ibrahim to sacrifice his son as an act of obedience to Allah. Animals like sheep and goats were sacrificed as per rituals as people distributed the meat among neighbours and relatives on the pious occasion. In the national capital, thousands of Muslims thronged various mosques including Jama Masjid and Fatehpuri Masjid, to offer ‘namaz’ and greeted ‘Eid Mubarak‘ by embracing one another. Also Read - Pulwama Attack Conspirator & JeM Chief Masood Azhar's Kin Killed in J&K Encounter

The faithfuls dressed in traditional fineries then visited homes of their friends and relatives and exchanged gifts amid elaborate security arrangements made by Delhi Police to prevent any untoward incidents. Children were a happy lot receiving Eidi (Eid money) from elders.
Clerics and community leaders delivered sermons on the occasion of Eid-ul-Azha, also know Bakr-Id, which occurs the day after pilgrims conducting Haj, the annual pilgrimage to Mecca in Saudi Arabia by Muslims worldwide, descend from Mount Arafat.

Imams, in their speeches, asked the faithful to follow principles of love, compassion and kindness as preached by Islam. In Srinagar, Jammu and Kashmir Chief Minister Omar Abdullah was among over 35,000 people who offered prayers at the Hazratbal Shrine on the banks of picturesque Dal Lake. Abdullah did not celebrate the festival and instead donated blood at a government hospital as mark of solidarity with the flood-affected people of the state. The prayers passed off peacefully in the Valley barring an incident of stone-pelting at Safa Kadal.