In the advisory, the Assam government said that the people of Assam, staying in Mizoram due to work-related compulsion, should exercise utmost caution.

Guwahati: In wake of the border dispute between the two states, the Assam government on Thursday issued an order advising its people to abstain from travelling to Mizoram to avoid further conflict. In the travel advisory, the state government asked its people to exercise extreme caution.Also Read - Boat Carrying Nearly 100 People Capsizes in Assam's Dhubri, Several Missing; Rescue Ops Underway

“Given the prevailing situation, the people of Assam are advised not to travel to Mizoram as any threat to the personal safety of people of Assam can’t be accepted. People of Assam, staying in Mizoram due to work-related compulsion, should exercise utmost caution,” the advisory said. Also Read - Canada Issues Travel Advisory For Its Citizens, Says Beware Of Terrorism Threat In India-Pakistan Borders

Due to the border dispute, over 6 Assam Police personnel and a civilian were killed and over 50 others including a superintendent of police were injured when the Mizoram Police opened fire on a team of Assam officials Monday. Also Read - Heavy Rainfall Warning Issued For THESE States Till September 27

Copy of the travel advisory: 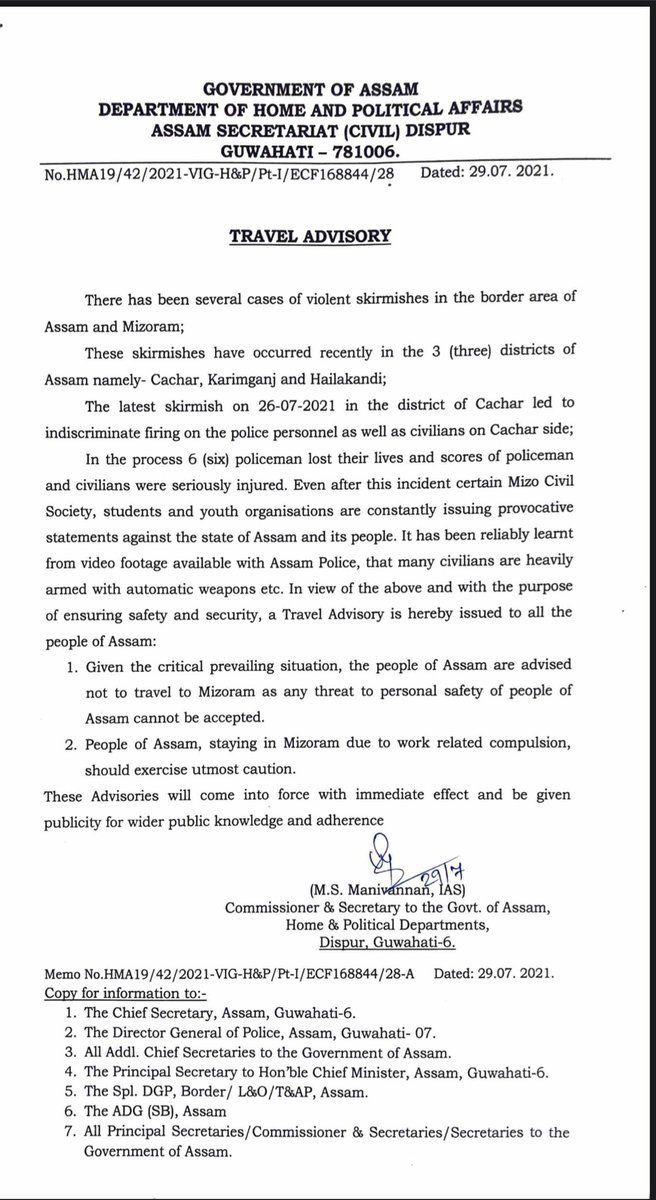 However, on Thursday, the situation along the Assam-Mizoram border was “calm and under control, according to Cachar district official. To bring the situation further under control, the Central forces were deployed along the interstate border at Lailapur, while state police personnel remained 100 metres inside their respective borders.

Moreover, the security has also been tightened for students and Mizos residing in the three districts of Barak Valley.

On Thursday, Assam and Mizoram exchanged barbs over deployment of security forces along the interstate border, days after both sides were locked in a fierce gun battle near the boundary that left six policemen and a civilian dead.

The Union Ministry of Home Affairs has ordered deployment of CRPF personnel at the Assam-Mizoram border following which Assam withdrew its forces from the post, Cachar Guardian Minister Ashok Singhal said.

“Peace and harmony are yet to be established in the border area, but we want to make it clear that not an inch of Assam’s land will be allowed to be taken away by Mizoram, Singhal asserted.

A defiant Mizoram government, meanwhile, claimed that a large contingent of Assam Police personnel were being mobilised at the interstate border.

Mizoram Home Secretary Lalbiaksangi, in a letter to the Additional Secretary in-charge of the Northeast on Thursday, said armed personnel of Assam Police were moving Dholai and Hawaithang areas in Cachar district, where violence had erupted on Monday.

On Wednesday, during a meeting chaired by Union Home Secretary Ajay Kumar Bhalla in Delhi, both the state governments had agreed to deploy Central Armed Police Force personnel in the disturbed areas under the supervision of the home ministry.

It must be noted that the two states share a 164.6-km border between Assam’s Cachar, Hailakandi and Karimganj districts, and Mizoram’s Kolasib, Mamit and Aizawl. However, both the states have different interpretations of their territorial border. While Mizoram believes that its border lies along an inner line’ drawn up in 1875 to protect tribals from outside influence, Assam goes by a district demarcation done in the 1930s.