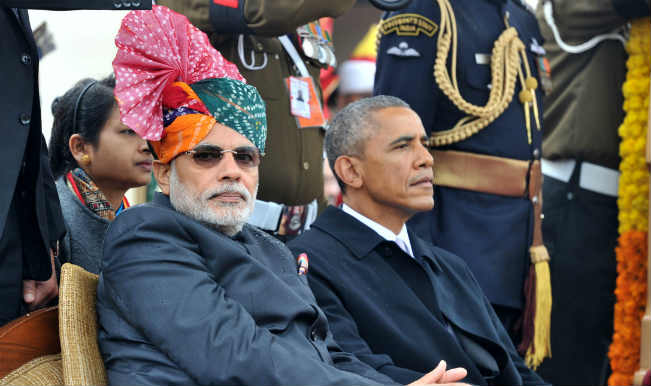 New Delhi, Jan 27: Experts and Analysts have said that US President Barack Obama’s visit has helped both the countries to foster better ties as the relationship between the two countries had stagnated briefly. “When two leaders meet four times in four months and twice hold summits, it means that the strategic partnership which had become lukewarm between India and the U.S. has now picked up momentum and this momentum is very fast,” said an analyst, Chintamani Mahapatra. Also Read - Poll Panel Seeks Report on TMC's Complaint About PM's Pic on COVID-19 Vaccination Certificate

Both sides hope to build enough momentum to forge a relationship that will help balance China’s rise by catapulting democratic India into the league of major world powers. Most significant between the two was an agreement on issues that, despite a groundbreaking 2006 pact, had stopped U.S. companies from setting up nuclear reactors in India and had become one of the major irritants in bilateral relations. Also Read - Breaking News Updates: After BJP, Now Congress Releases First List of 13 Candidates For Bengal Polls

Many felt that while the major hurdle in the nuclear deal had been cleared, there was still a long way to go. “While the roadblock has been cleared, this road is going to be quite complex that the India and the United States will traverse. The larger positive effect I think is in the political signal and I think that the signal is that India and the United States can engage with each other in a robust way. And perhaps the defence and manufacturing sector and high technology may be the first benefeciares,” said defence expert, Uday Bhaskar.

Business expert said the visit holds expectations of a more opening-up of markets between the two nations as well as exchange in technology. “India is not only looking to set-up manufacturing bases of American companies in India but what we are also looking at is sensitive technology transfer because from India’s standpoint getting sensitive technology getting cutting-edge technology is what will help us in the longer run,” said market expert, Alok Churiwala.

U.S. President Barack Obama on his trip has also pledged $4 billion in investments and loans, seeking to release what he called the “untapped potential” of a business and strategic partnership between the world’s largest democracies. Prime Minister Modi said U.S. investment in India had doubled in the past four months and vowed to do more to slash the country’s notorious red tape and make it one of the world’s easiest places for business.