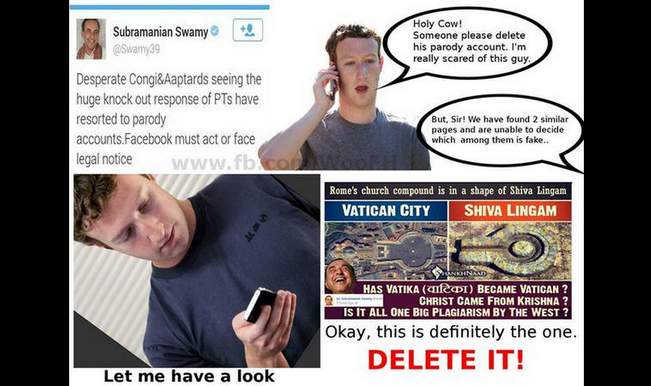 We guess someone from Facebook noticed it and decided to take action and the team deleted the real fan page thinking it was a parody page! To be fair to the good people at Facebook, some of Swamy’s claims do seem like bad parody. While Twitter allows parody accounts, Facebook is stricter about it which is the reason the page was taken down. Meanwhile the fake page, with URL: https://www.facebook.com/SusuSwamy?fref=ts is still at large! Also Read - 'I Never Wear Mask, so What,' Says Madhya Pradesh Home Minister; Tempers Remark After Drawing Fire | WATCH

The parody account is extremely well run and has some hilarious content including a story about how William Shakespeare was actually born in India. Here’s the parody Swamy version:

Mrs. & Mr. Iyer from Palakkad (Kerala) had 13 children. Two of them died at birth. And of the 11 remaining, 10 decided to become Rishis. While the 11th, a boy, ‘Vilvam’ Sheshappa Pathmanapha Iyer, decided to pursue education at the local Ashram.

This young Brahmin boy completed his Matric equivalent in Ashram but unfortunately fell in love with a missionary white girl who regularly visited India from a faraway land called England. Seeing his command over English, she tricked this innocent boy to study in England, which was the best location for East India Company and convinced him to elope with her.

Not many details are available of this story after Sheshappa eloped with his lady love. The Sheshappa Iyer family, in the absence of such necessities like Twitter, Whatsapp and Facebook in those days, could not locate their innocent boy or their cunning missionary daughter-in-law.

Later, there were unconfirmed reports that in the records of a missionary school in the Warwickshire county, the original entry for admission of a child, by the name William Shakespeare (1564 AD to 1616 AD) purported to have read as ‘Vilvam Sheshappa Iyer’.

In fact, in an interview with Scroll.in, the software developer who created it says he won’t change the name to avoid being taken down by Facebook. The page was created after everyone so blindly followed anything the Swamy page run by ShankNaad put up. So much so that they even defended some of the parody account’s posts!

The creator added: ‘It was quite disturbing to see people just blindly follow him. So I thought this would be a fun way to counter that. And what has happened is that many people who are his own supporters end up reposting and sharing this page, and even defending things we’ve written, like the Monalisa Shah post or the one about Australia [being a Hindu nation earlier],’ he said.