Fact Check: No, RBI is Not Issuing New Notes And Coins of Different Denominations

A simple check of the RBI's official website shows that the aforementioned claim is false. This is the second time such rumours have emerged, after September. 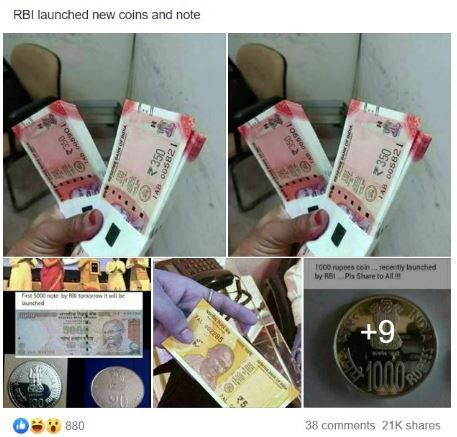 Back then, several media outlets had clarified that this was fake news. However, the claim has made a comeback in recent days with the same message that the RBI has issued new notes and coins of the aforementioned denominations.

So, what exactly is the truth?

The simple answer is no, because the RBI, whenever it releases currencies of a new denomination, notifies the public about the same through circulars on its official website. There is no notification regarding issuing of notes and coins of the respective denominations. In fact, the last notification on its website is from June 26, which is about ‘the public being able to use all coins as legal tender.

Additionally, the central bank also uploads images and security details of all the notes currently in circulation on ‘Paisa Bolta Hai‘ website. No mention can be found there as well about these notes and coins.

The picture, in fact, is photoshopped. If one looks closely at the image of the Rs 5 ‘note,’ one can easily see ‘Pachas Rupaiye’ (Rs 50) written on the top. Also, serial numbers of the Rs 5 and Rs 2 ‘notes’ are the same, when in reality, all notes are given different serial numbers.

Several such false claims have been made especially since Prime Minister Narendra Modi, in a surprise move on November 8, 2016, announced the withdrawal of currency notes of Rs 1,000 and Rs 500 denomination from the banking system. The move came to be known as ‘demonetisation.’