The Kejriwal-led Delhi Government has rejected the request of Delhi Police seeking to convert nine stadiums into temporary prisons, in view of farmers protest.

Farmers Protest Today LIVE updates: The Delhi police has beefed up security at its border with Haryana and Uttar Pradesh (Rohtak-Jhajjar border, Singhu border (Delhi-Haryana border), Delhi-Gurugram and Delhi-Jammu highway near Karna Lake in Karnal) as thousands of protesting farmers resumed their onward journey on tractor-trailers towards the national capital to protest against the Centre’s recently passed farm laws. Yesterday, several protesters and policemen were injured as farmers broke barricades and threw them down from a bridge ahead of the Punjab-Haryana border in Shambhu in Punjab’s Patiala and near Haryana’s Ambala.

Stay tuned to this place for LIVE updates on farmers’ protest against Centre’s Farm Laws.

18: 45 PM: The government has always been ready to discuss issues with farmers. We have invited farmers’ organizations for another round of talks on 3rd December. I appeal to them to leave agitation in view of COVID-19 and winter: Union Agriculture Minister Narendra Singh Tomar

18: 20 PM: Nearly 25,000 farmers had sent proposal to PM Modi. The laws have been made for traders saying they’ll eventually benefit farmers. If govt has brought laws to support farmers, we welcome it. However, there are drawbacks: Mohini Mohan Mishra, All India Secretary, Bharatiya Kisan Sangh

18:16 PM: Farmers shouldn’t have been treated so roughly. Using tear gas on farmers who already had tears in their eyes. Farmers’ demands are right, govt should heed to them & resolve issues instantly. I ask people of Haryana to treat farmers with care: Bhupinder S Hooda, Former CM Haryana

17:47 PM: Train services normal at all corridors from 5:35 pm onwards. Tomorrow regular services on all Lines as of now: Delhi Metro

17: 21 PM: Police remove barricades at Shambhu border between Haryana and Punjab, near Ambala as farmers have been allowed to enter Delhi. “Nobody will be stopped, commuters can travel with ease,” says Rajesh Kalia, Ambala SP

16:52 PM: Aam Aadmi Party’s Burari MLA Sanjeev Jha met Delhi Police officials and asked them to ensure that protesting farmers do not face any hardships during their demonstration at the Nirankari ground in his constituency.

16:31 PM: No govt in world can stop farmers fighting battle of truth. Modi govt will have to agree to demands & take back the ‘black laws’, says Congress leader Rahul Gandhi.

Delhi: Traffic congestion at Delhi-Gurugram border due to checking of vehicles by police, in view of farmers' #DelhiChalo march protest. pic.twitter.com/RDhojUumWQ

15:25 PM:Farmers enter the national capital through the Tikri border after being given permission to hold their demonstrations at the Nirankari Samagam Ground in the Burari area.

15: 18 PM: Haryana CM ML Khattar says Centre ‘always ready’ for talks and solution will emerge only through dialogue, not agitation.

15:17 PM: Delhi: College students say their exam got canceled due to farmers’ ‘Chalo Delhi’ protest march. “We’re coming down from Rohtak. Our exams were canceled. There are many students who travel to their colleges. It’s causing a lot of problems for us,” says a student.

15:10 PM: After discussion with farmer leaders, Delhi Police has allowed farmers to protest peacefully at Nirankari Samagam Ground in Burari. We appeal to them to maintain peace in order to avoid any inconvenience to others: Delhi Police PRO Eish Singhal

15:05 PM:  Police give farmers permission to enter Delhi and protest. “We’ve crossed about 10 barriers on our way. We’re thankful to the administration for giving us permission to protest. We’re happy and only want a peaceful resolution to the issue,” said a farmer at Tikri border area

14:50 PM: I welcome Centre’s decision to allow farmers to enter Delhi to exercise their democratic right to protest. They should also now initiate immediate talks to address farmers’ concerns on the FarmLaws and resolve the simmering issue, said Punjab Chief Minister Amarinder Singh

14:40 PM: The Delhi Police Commissioner has appealed to the farmers to maintain order and demonstrate peacefully.

14:35 PM: Protesting farmers will be allowed to enter the national capital. They will have the permission to protest at the Nirankari Samagam Ground in the Burari area, said Delhi Police Commissioner

14: 25 PM: According to TV reports, the Delhi Police has given permission to farmers to protest at Nirankari Samagam Ground in Burari area of the national capital.

14:15 PM: Massive showdown at Singhu border as protesters, cops clash despite farmers being allowed entry into the Delhi.

14:00 PM: Haryana Police use tear gas to try to disperse farmers as they take part in protests against Centre’s Farm laws, at the Singhu border.

01: 45 PM: Taking to Twitter, Haryana CM Manohar Lal Khattar asserted that the Centre is always ready to talk. He also urged protesting farmers to speak to the central government. 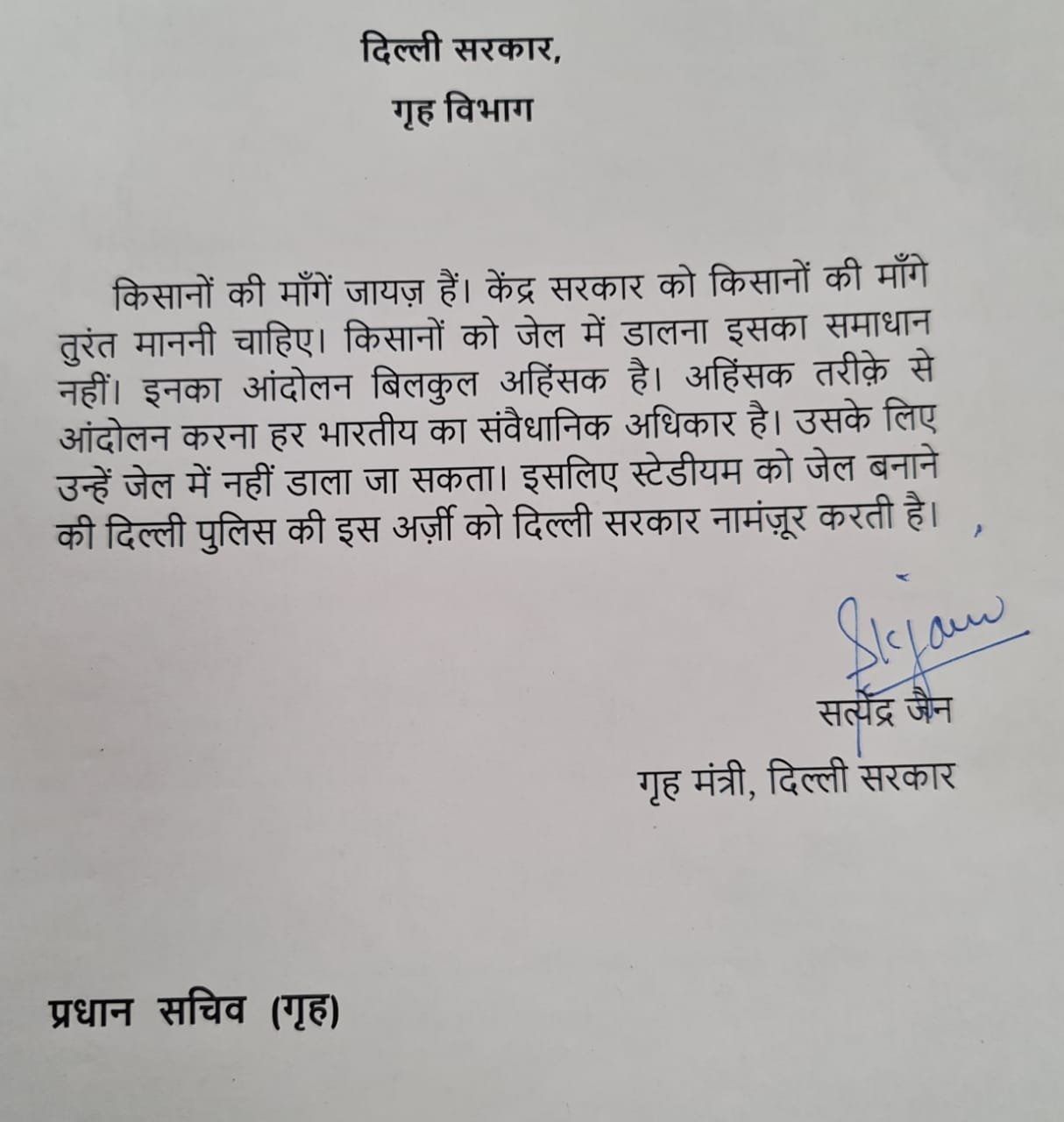 Meerut: A groom, along with his wedding party, seen walking on road due to road blockade amidst ongoing farmers' protest .

Police have placed barricades on roads to stop the farmers heading towards Delhi, as part of their protest march against Centre's Farm Laws. pic.twitter.com/nMr1FKg0cf

12:05 PM: Delhi police has completely closed Tikri border for traffic movement. “Traffic intending to go towards Haryana is also closed. All motorists are advised to avoid this route in view of the protest by Kishan Sangharsh committee,” traffic police tweeted.

11:55 AM: Farmers groups, including women, heads towards Delhi while protesting & raising slogans on the main highway in Sirsa.

11:49 AM: Farmers from Punjab wait at the Shambhu border between Haryana and Punjab, near Ambala, to cross into Haryana to proceed to Delhi. Security deployed, barriers and water cannon vehicle placed at the border to prevent farmers from entering Haryana.

11:48 AM: Protesting farmers jump barricades in Sirsa, say they’re going to Delhi for their rights. “Whatever we do will be peaceful. We won’t harm any person or property. Even if we have to stay for a month, we will. Even if we have attain martyrdom, we will,” a farmer said.

11:46 AM: “I urge the Delhi Govt to deny permission for setting up temporary prisons. The farmer of our country is neither a criminal nor a terrorist. Right to protest peacefully is enshrined in Indian Constitution – Article 19(1) and protests are the hallmark of a free, democratic society”, tweeted Raghav Chadha. Earlier in the day, Delhi Police had sought permission from the Kejriwal-led government to convert nine stadiums into temporary prisons.

11:40 AM: Traffic jam at Yamuna Expressway as agitating farmers block the road. Police personnel present at the spot.

11:29 AM: Plumes of smoke seen as security personnel use tear gas to disperse farmers protesting at Singhu border (Haryana-Delhi border). Farmers are headed to Delhi as part of their protest march against Centre’s Farm laws.

#WATCH Farmers use a tractor to remove a truck placed as a barricade to stop them from entering Delhi, at Tikri border near Delhi-Bahadurgarh highway pic.twitter.com/L65YLRlkBo

Security deployed, barriers placed at the Shambhu border between Haryana and Punjab, near Ambala, to stop the protesting farmers from proceeding to Delhi

"We will ensure law and order is maintained," says SP Ambala pic.twitter.com/qBlXZ5r98J

09:58 AM: Farmers from Punjab stopped from entering Delhi at Singhu border. “We have been doing a peaceful protest and we will continue it. We will enter Delhi protesting peacefully. In a democracy, one should be allowed to protest,” news agency ANI quoted a farmer as saying.

Delhi: Traffic jam at Delhi-Gurugram border, due to checking of vehicles by police, in view of farmers' protest march.

09:41 AM: Commuters headed towards Delhi from other states say they’re facing problems after getting stuck on Delhi-Panipat Highway due to road blockade. “I’m coming from Jammu & was suppose to reach Delhi yesterday evening. We have no updates so far,” says Shivangi, a commuter.

09: 41 AM: A farmer says, “No matter what, we will proceed to Delhi. We are travelling with our families carrying ration for six-months.”

09:40 AM: A group of protesting farmers from Punjab reach Bahadurgarh

Farmers are headed to Delhi as part of their protest march against Centre's Farm laws. pic.twitter.com/Z0yzjX85J5

09:02 AM: Police use tear gas shells to disperse protesting farmers at Singhu border (Haryana-Delhi border). Farmers are headed to Delhi as part of their protest march against Centre’s Farm laws.

07:05 AM: The Delhi Police has already asked the farmers not to enter Delhi as they don’t have permission to protest in the city.

07:00 AM: Farmers participating in ‘Delhi Chalo’ protest march, stay for the night at the toll at Panipat Highway. A farmer, Robindeep Singh says, “We are carrying food enough to last a month, we have stove & other kitchen items. We are also carrying blankets to brave the cold.”

Meanwhile, the Delhi Metro Rail Corporation said that the metro services from NCR region to Delhi will remain suspended on Friday till further notice. “As advised by Delhi Police, Metro services will be available only from Delhi towards the NCR sections tomorrow. However, services from the NCR stations towards Delhi will not be available due to security reasons till further notice”, the DMRC had said in a tweet yesterday.

On the other hand, Haryana Chief Minister Manohar Lal Khattar and his Punjab counterpart Captain Amarinder Singh entered into a Twitter war over farmers’ ‘Delhi Chalo’ march. While Singh lambasted Khattar for stopping farmers from moving towards the national capital, calling it “totally undemocratic and unconstitutional”, the latter told the Punjab chief minister to stop “inciting innocent farmers”.

The All India Kisan Sangharsh Coordination Committee (AIKSCC), Rashtriya Kisan Mahasangh and various factions of the Bharatiya Kisan Union have joined hands and formed a ‘Samyukta Kisan Morcha’ to press the central government to scrap the three new farm laws—the Farmer’s Produce Trade and Commerce (Promotion and Facilitation) Bill, 2020 and the Farmers (Empowerment and Protection) Agreement of Price Assurance and Farm Services Bill, 2020.

Despite objection from opposition parties, the Bills were passed by the Upper House in September through voice vote.