Union Agriculture Minister Narendra Singh Tomar, Railways, Commerce and Food Minister Piyush Goyal and Minister of State for Commerce Som Parkash, who is an MP from Punjab, are holding the talks with the representatives of 40 farmer unions at Vigyan Bhawan, in New Delhi.

New Delhi: The seventh round of talks between protesting farmer unions and three central ministers got underway here on Monday afternoon to break the over-a-month-long deadlock on recent farm laws. Union Agriculture Minister Narendra Singh Tomar, Railways, Commerce and Food Minister Piyush Goyal and Minister of State for Commerce Som Parkash, who is an MP from Punjab, are holding the talks with the representatives of 40 farmer unions at Vigyan Bhawan, in New Delhi.Also Read - 'Not Possible to Make Law on MSP', Says Haryana CM Manohar Lal Khattar After Meet with PM Modi

On December 30, the sixth round of talks was held between the government and the farmer unions, where some common ground was reached on two demands — decriminalisation of stubble-burning and continuation of power subsidies. However, no breakthrough has been reached so far on the two main demands of the protesting farmers — a repeal of the three recent farm laws and a legal guarantee to the MSP procurement system. Also Read - SKM to Observe 'Kisan Mazdoor Sangharsh Diwas' on Nov 24

On Sunday, Tomar met Defence Minister Rajnath Singh and discussed the government strategy to resolve the current crisis at the earliest, sources said. Tomar discussed with Singh “all possible options” to find a “middle path” to resolve the crisis, they added.

Thousands of farmers, mainly from Punjab, Haryana and western Uttar Pradesh, are protesting at various Delhi borders for over a month against the three laws. They have stayed put despite heavy rains and waterlogging at protest sites over the last couple of days, besides severe cold weather conditions prevailing in and around the national capital.

Enacted in September 2020, the government has presented these laws as major farm reforms and aimed at increasing farmers” income, but the protesting farmers have raised concerns that these legislations would weaken the MSP and “mandi” (wholesale market) systems and leave them at the mercy of big corporations. The government has maintained that these apprehensions are misplaced and has ruled out repealing the laws.

While several opposition parties and people from other walks of life have come out in support of the farmers, some farmer groups have also met the agriculture minister over the last few weeks to extend their support to the three laws.

Last month, the government had sent a draft proposal to the protesting farmer unions, suggesting seven-eight amendments to the new laws and a written assurance on the MSP procurement system. The government has ruled out a repeal of the three agri laws.

Here are the latest updates on the farmers’ protests:

6.30 PM: The meeting between agitating farmer leaders and government concludes at Vigyan Bhawan. Next round of talks to be held at 2 pm on January 8.

5.00 PM: The deadlock over the repeal of the contentious farm laws continued, with the Centre and the farmers unable to come on the same page. In the seventh round of meeting that’s still on, the farmers’ representatives refused to climb down from their demand. The government also refused to budge from its stance.

4.00 PM: Farmers’ representatives have food during the lunch break at Vigyan Bhawan where the government is holding talks with farmers on three farm laws.

Delhi: Farmers' representatives have food during the lunch break at Vigyan Bhawan where the government is holding talks with farmers on three farm laws. https://t.co/5AtK2LTB9n pic.twitter.com/t12DpUKUWz

3:00 PM: Union Ministers Narendra Singh Tomar, Piyush Goyal and Som Parkash along with government officials and representatives of farmers observed a two-minute silence for farmers who died during the ongoing protest. 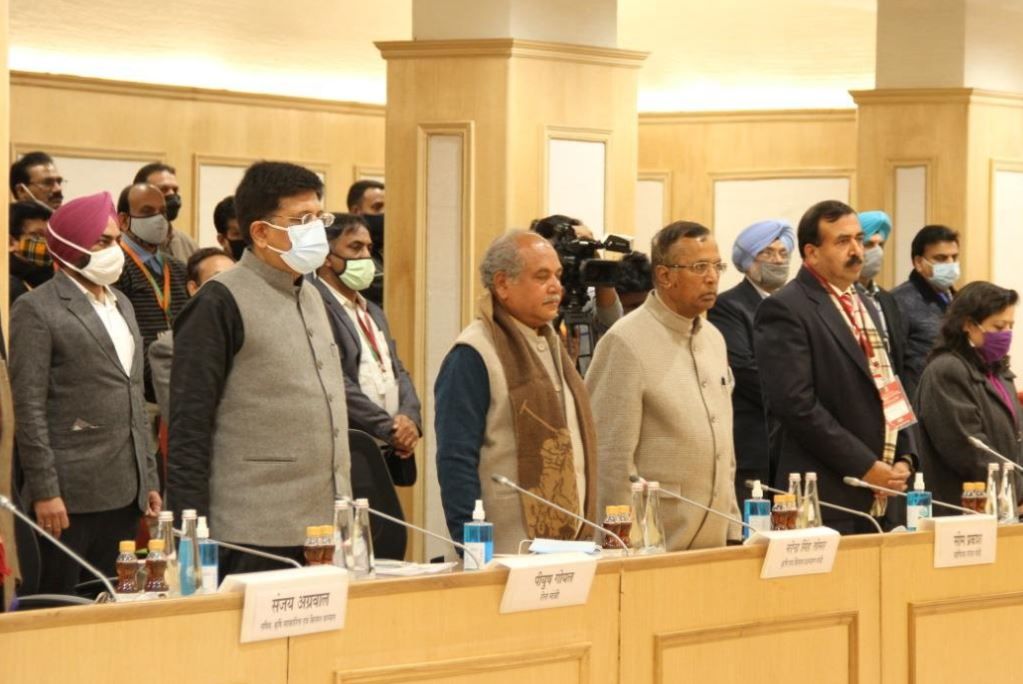 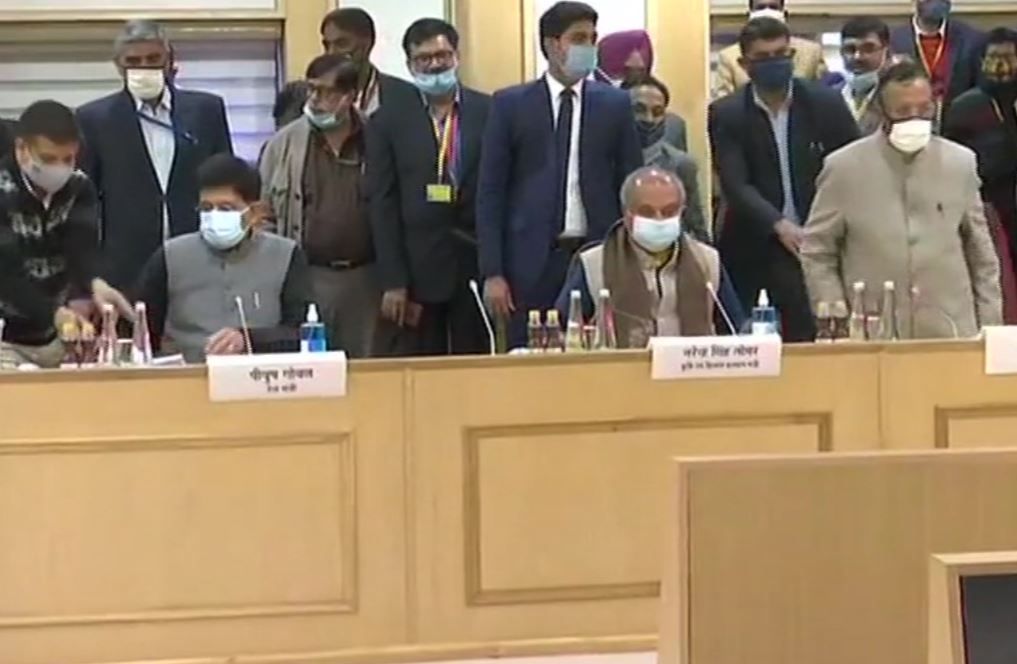 01.00 PM: Routes connecting Delhi to Ghaziabad and Noida via Ghazipur and Chilla borders to remain partially closed due to the ongoing farmers’ protest, the traffic police said. They advised commuters to take alternative routes for coming to Delhi via Anand Vihar, DND, Bhopra and Loni borders.

12:50 PM: A delegation of farmer leaders arrive at Vigyan Bhawan for talks with Union Government on the three contentious farm Laws. “We hope there is a breakthrough in this meeting in the new year,” said a farmer leader. 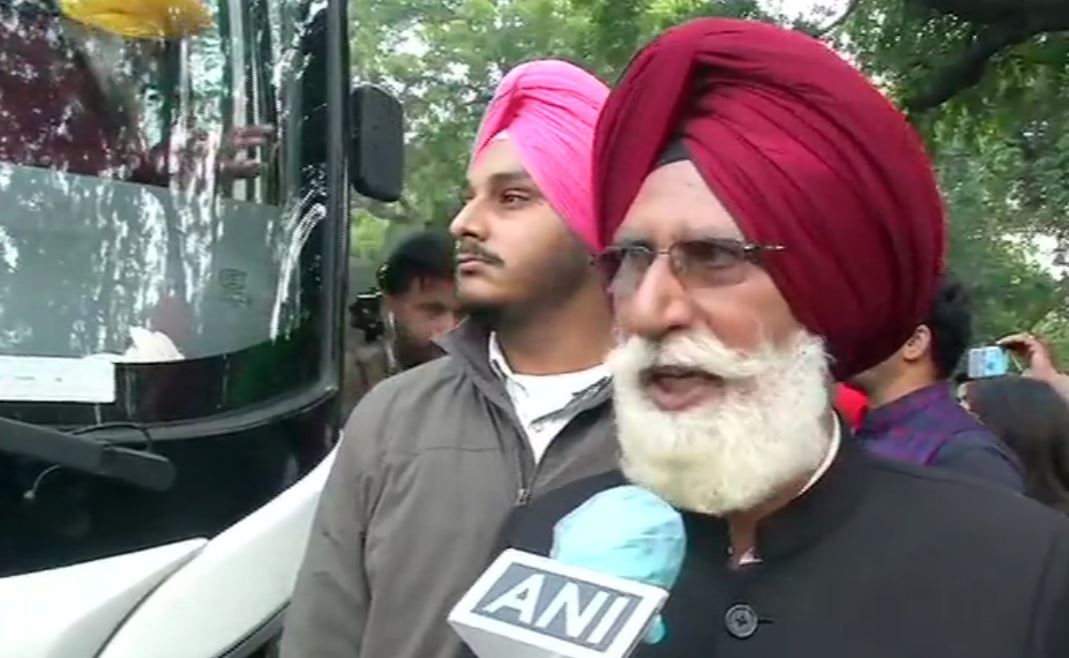 12:40 PM: I am hopeful that we will find a positive solution today. We will discuss all issues in the meeting: Union Agriculture Minister Narendra Singh Tomar on today’s talks with farmers

12:00 PM: As the farmers’ protests entered 39th day, a group of Buddhist monks from Lucknow also lent their support to the cause. The monks set up camp at the Gazipur (Delhi-Uttar Pradesh) border and have vowed not to go back till the farm laws are taken back. A monk said, “We have left our temples in Lucknow to join the farmers in their protest against the three laws. We have taken an oath not to leave till the farmers get what they are fighting for – the repeal of the three black laws.”

11:50 AM: It is up to the government whether it wants to solve the farmers’ problems or conspire against the farmers to fizzle out their struggle. We hope govt will take a human approach towards the farmers: Hannan Mollah, General Secretary, All India Kisan Sabha ahead of today’s talks with government.

11:35 AM: So far, 60 farmers have lost their lives during the protest. One farmer is dying every 16 hours. It is the responsibility of the government to answer: Rakesh Tikait, Spox, Bharatiya Kisan Union at Gazipur border.

11:15 AM: Haryana Chief Minister ML Khattar sahab like General Dyer is allowing to fire upon farmers and using tear gas against them. Are the country’s farmers our enemies? Are they Army personnel of China or Pakistan? It’s shameful: Aam Aadmi Party leader Raghav Chadha

11:00 AM: Security forces have been deployed along the border in view of the farmers protests  along the Singhu border against the Centre’s new farm laws.

10 AM: Seeking immediate intervention of the government regarding the vandalism of its towers and other communication infrastructure by miscreants, Reliance Industries Limited (RIL) on Monday said that they have not done any ‘corporate’ or ‘contract’ farming in the past, and have absolutely no plans to enter this business.

9:45 AM: Veteran actor and former Member of the Parliament Dharmendra said he prays with all his heart that the farmers agitating against the three farm laws get justice today. “I hope today my farmer brothers get justice. I pray with all my heart. Every noble soul will get relief,” Dharmendra, 84, wrote in Hindi on Twitter. “I am in extreme pain to see the suffering of my farmer brothers. Government should do something fast,” he added.

09:20 AM: Protesters demonstrating against the farm laws at the Chilla border (Delhi-Noida border) take refuge in tents amid the recent spell of rainfall in the capital “We will only relent after the govt accepts our demands of rescinding the black farm laws,” said a protester. 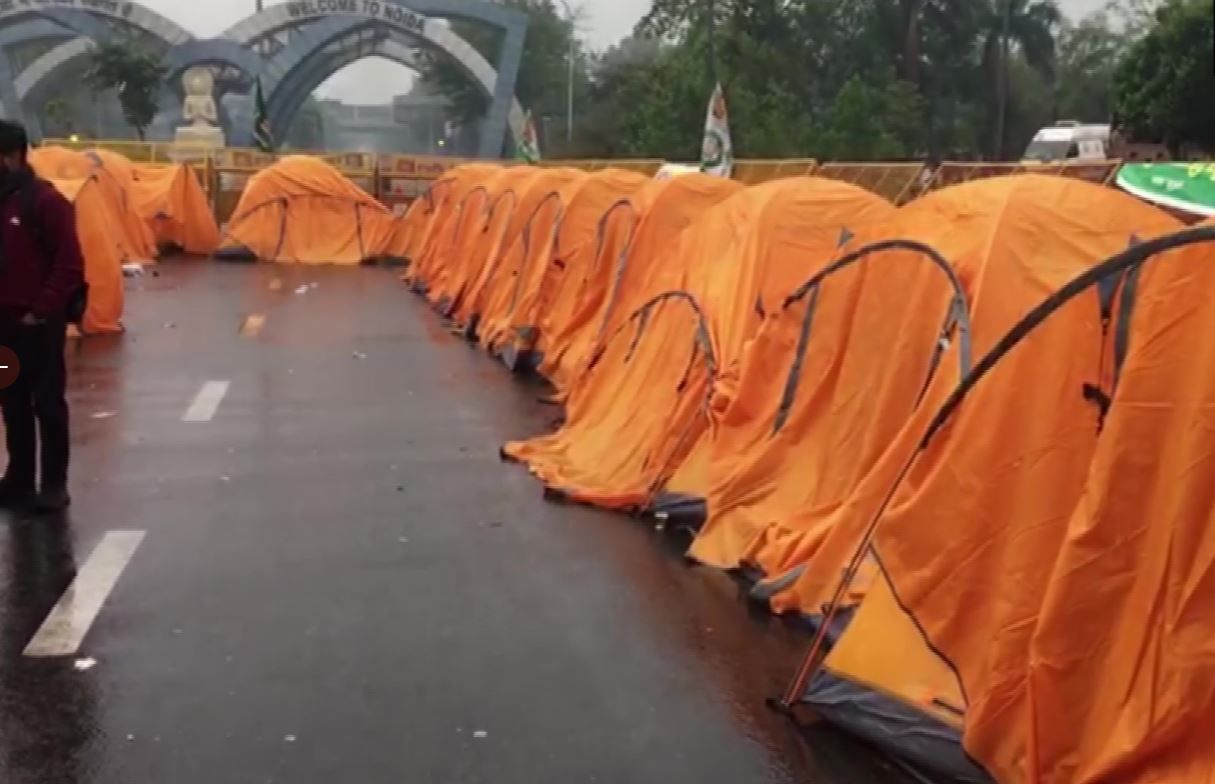 09.00 AM: Our demands are the same as before-repeal the three farm laws and guarantee MSP. If our demands aren’t met, then, we’ll hold tractor march on Jan 6 and also on Jan 26: Sukhwinder S Sabra, Joint Secy, Kisan Mazdoor Sangharsh Committee, Punjab ahead of seventh round of talks with govt

08.00 AM: Many issues are to be discussed. The government must understand, the farmer has taken this movement to his heart and won’t consider less than the laws’ repeal. Govt should implement Swaminathan’s report and make law on MSP: Rakesh Tikait, Spokesperson, BKU, on today’s meeting with Central government.