Notably, the Connaught Place opens around 1 PM on Republic Day every year.

Farmers’ Tractor Parade Latest Updates: In the wake of the farmers tractor parade that turned violent, the New Delhi Traders Association on Tuesday said that the Connaught Place area in the national capital will remain closed.Also Read - Viral Video: You Can Win Rs 8 Lakh If You Finish This 8 Kg 'Baahubali' Thali in 40 Minutes | Watch

“The tractor parade has gone haywire. The farmers have reached ITO. I spoke to Police Commissioner and it was advised the markets remain closed. We have asked the outlets, which would have opened by now, to close down,” he said. Also Read - Delhi Set For BTS V's Birthday! Kim's Cutest LED Hoarding Put Up At Connaught Place

Notably, the Connaught Place opens around 1 PM on Republic Day every year. “It is a day of peak sales for traders but safety of everyone is important so it is better to remain closed today,” he said.

The development comes after protesting farmers clashed with police at several places in the national capital and entered the iconic Red Fort and ITO in the heart of national capital, with hundreds of them deviating from pre-decided routes, prompting security personnel to resort to lathicharge and tear gas.

Moreover, chaotic scenes were witnessed art several places including at ITO, where hundreds of protesters could be seen chasing police personnel with sticks and ramming their tractors into the buses parked by police.

Pushed back by the police form the ITO in Central Delhi a section of the protesting farmers drove their tractors to Red Fort complex. Later, the crowd swelled at the monument as some protesting farmers and ‘Nihangs’ (traditional Sikh warriors) were seen entering the Red Fort and hoisting a flag from the staff from which prime minister unfurls the tricolour on Independence Day.

The farmers who began their march from different border points, much before the time permitted to them for their tractor rally, reached ITO in Central Delhi despite the force denying them permission for it.

Meanwhile, the internet services have been suspended in Noida Sector 34 and some parts of the National Capital Region (NCR) amid clashes between the protesters and the Delhi Police personnel during the farmers’ tractor rally. Several people living in Sector 34 area received a message that internet services have been stopped as per the government order. 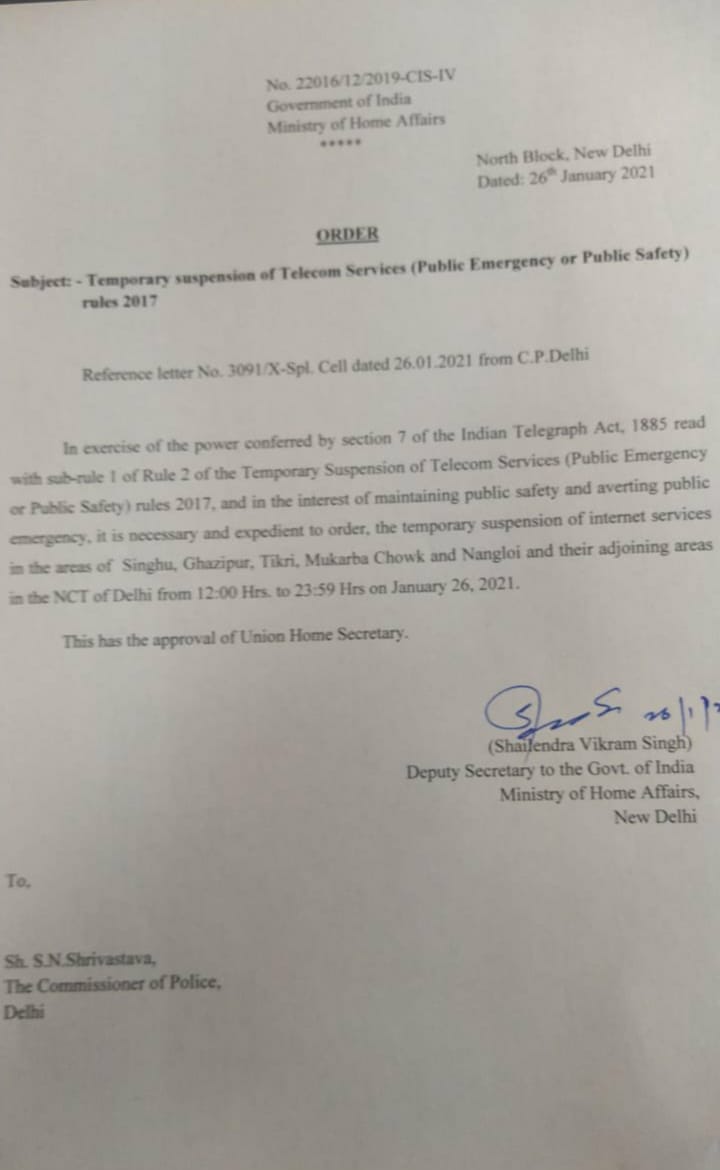 Issuing an order, the Ministry of Home Affairs (MHA) temporarily suspended internet services at Singhu border which connects Delhi and Haryana and where thousands of farmers have been camping for two months.

The home ministry has also suspended internet services at the Ghazipur border, Tikri border, Mukarba Chowk and Nangloi till 23:59 hours (11:59 pm) as a precautionary measure in view of the violence that broke out in parts of Delhi during the farmers’ tractor rally.