The meeting took place at the Hari Nivas in Srinagar, where Omar is still under detention under the draconian Public Safety Act (PSA). This was their first meeting in more than seven months.

New Delhi: National Congress (NC) chief and former Jammu and Kashmir Chief Minister Farooq Abdullah on Saturday met his son Omar in a Srinagar sub-jail, a day after the former was released after being detained for more than seven months under the draconian Public Safety Act (PSA). Also Read - Farooq Abdullah Released From Detention, Says 'Grateful to All Who Spoke For Our Freedom' 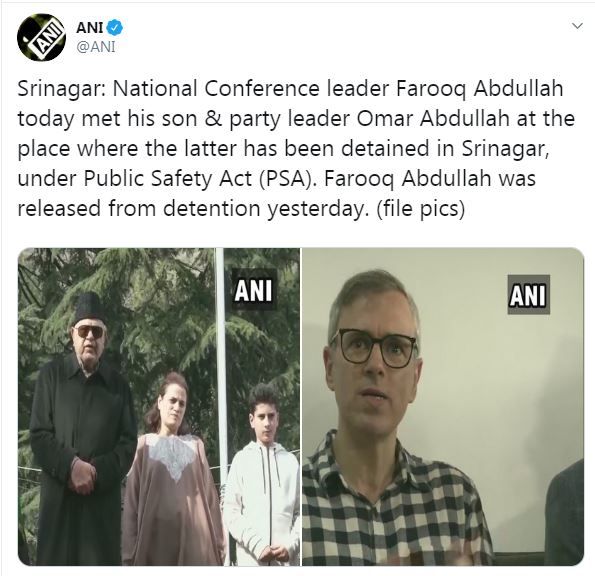 According to reports, the senior Abdullah, after his release, had requested the authorities to let him meet his son. After the permission was granted, he drove from his residence to Hari Nivas, where Omar is under detention, and met him for the first time in over seven months. The two were together for an hour, reports stated. Also Read - Farooq Abdullah More Nationalist Than PM Modi, Yashwant Sinha Slams Centre For Detention Extension 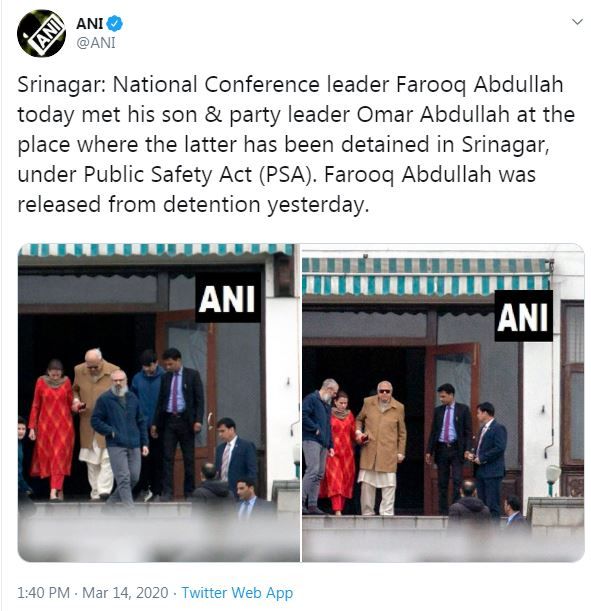 Earlier, speaking to media for the first time after being released, the NC chief had said that while he was grateful to everyone who prayed for his release, freedom would be complete only after others, too, are released. He had also paid a visit to the grave of his father Sheikh Abdullah, who founded the NC and was the third Chief Minister of Jammu and Kashmir.

Farooq and Omar Abdullah, himself a former Chief Minister, along with People’s Democratic Party (PDP) chief Mehbooba Mufti, another former Chief Minister of the erstwhile state of Jammu and Kashmir, were detained along with several leaders of the Valley on August 5, the day the Centre scrapped Article 370 of the Constitution, thus scrapping the special status of the now-former state.

While Farooq Abdullah has been released, Omar and Mufti continue to be in detention under the PSA, which was slapped on them last month.