Fijians crowd around to shake hands with NarendraModi, click selfies

Thousands of people gathered at Albert Park in this Fijian capital Wednesday to welcome Narendra Modi, the first Indian prime minister to arrive in this Pacific Ocean island nation in 33 years 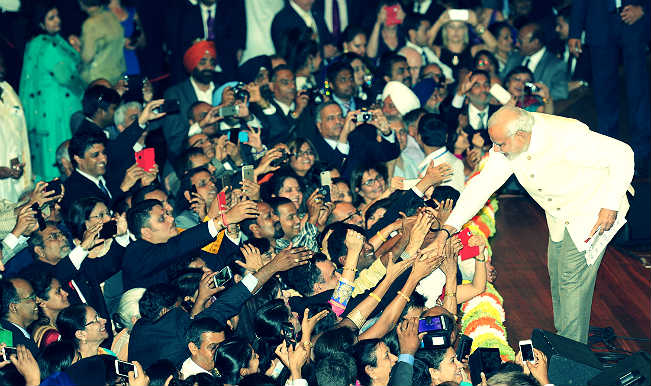 Suva, Nov 19 : Thousands of people gathered at Albert Park in this Fijian capital Wednesday to welcome Narendra Modi, the first Indian prime minister to arrive in this Pacific Ocean island nation in 33 years. Modi, who was accorded a traditional iTaukei ceremonial welcome by the people of Sorokaba in Ba, went around to meet the visitors, and shook hands as many took selfies with him. Also Read - Give Concrete Solutions, Not Plain Speeches: Congress Slams PM Modi Over His Address to Nation

Many people travelled from far away to see the prime minister of India. At the Albert Park, many visitors stood on the chairs to catch a glimpse of Modi as he walked around. Among the crowd was 76-year-old Hari-Narayan who was at Albert Park to see then Indian prime minister Indira Gandhi during her visit in 1981. He said he was happy at the visit of Modi. Read – Narendra Modi rules Australian media headlines Also Read - Anticipating Backlash, BJP Turns Off 'Dislike' Button on YouTube Channel Amid PM Modi's Address to The Nation

Many primary and secondary school students also took selfies with Modi and shook hands with him. Modi is here on a day-long visit, during which he held bilateral talks with Prime Minister Voreqe Bainimarama and both sides inked a number of agreements. Fiji comprises of over 300 islands, although only 110 of those are actually inhabited. The capital and largest city, Suva, is on Viti Levu.

The surface area of Fiji is around 18,274 sq km and this makes the country the 155th largest in the world. Its population is around 849,000, with over 300,000 persons of Indian origin who have made this Pacific nation their home for over a century. For every square kilometre of Fiji territory, there is an average of 46.4 people living there.