woman was robbed of her gold jewellery, cellphone and ATM card by an unidentified person after he terrorised her by firing inside an ATM in Yosufguda area here this morning, police said 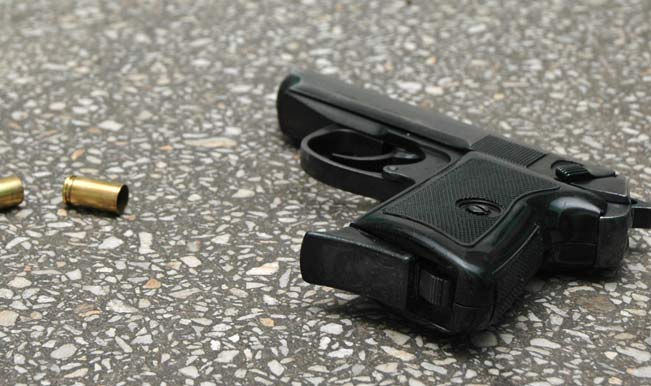 Hyderabad, May 20: A woman was robbed of her gold jewellery, cellphone and ATM card by an unidentified person after he terrorised her by firing inside an ATM in Yosufguda area here this morning, police said. The incident occurred at around 7.45 AM when Lalitha (aged around 25), a private firm employee staying at a hostel in Madhura Nagar, went to the ATM to withdraw money, they said. (Also Read: Airtel rolls out 4G trial in Hyderabad, Visakhapatnam) Also Read - Gas Cylinder Explodes at Residence in Hyderabad's Mir Chowk Police Station Area, 13 injured

“The armed man had covered his face with a kerchief. When the woman entered the ATM centre, he suddenly came from behind and demanded her to give the valuables. When she refused, he fired on the wall and after terrorising her took away her gold chain and earrings (weighing around 20 grams),” S R Nagar Police Station Inspector G V Ramana Goud told PTI. The accused also snatched her ATM card before fleeing. He also attempted to withdraw money from the ATM, but failed to do so due to some technical problem, he said. Also Read - Hyderabad Swimmer Who Saved People From Suicides Starts 'Sonu Sood Ambulance Service'

Police is verifying the CCTV footage and efforts are on to nab the accused, he said. Deputy Commissioner of Police (West Zone) A Venkateshwera Rao, who reached the crime scene, said the accused threatened the woman with a weapon and fired single round on the wall before robbing her gold ornaments. “He also took away her cellphone and ATM card and forced her to disclose its PIN number before fleeing. We suspect that the accused is an repeat offender…We are collecting scientific evidence,” the DCP said, adding, that the accused apparently used a country-made weapon for firing.
A probe is on into the incident, he added.