35-year-old Shahnaza, who lost all her belongings in the floods that ravaged the Kashmir Valley, broke down when Congress President Sonia Gandhi today visited her and her family at a rehabilitation centre here 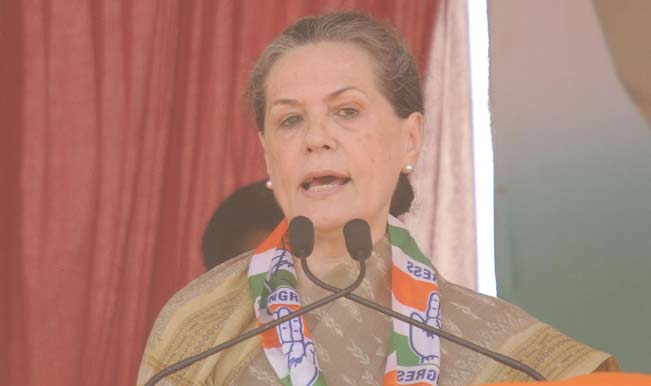 Anantnag (J&K), Sep 29: 35-year-old Shahnaza, who lost all her belongings in the floods that ravaged the Kashmir Valley, broke down when Congress President Sonia Gandhi today visited her and her family at a rehabilitation centre here. Sonia, accompanied by her son Rahul Gandhi and senior Congress leaders including Leader of Opposition in Rajya Sabha Ghulam Nabi Azad, visited the camp at Dehruna village, 12 kms from here, and interacted with the affected people. Also Read - 'India Feels The Absence...', Rahul Gandhi Launches Veiled Attack on PM Modi on Manmohan Singh's Birthday

Shahnaza was unable to control her tears when she saw the Congress President enter the tent that houses her family. Narrating her ordeal, she told Sonia that her life had been devastated by the floods as she lost everthing that her family had accumulated over the years, including their house. As she pointed to the plight of her three little daughters, Sonia hugged her and shook hands with the children. Also Read - Sonia Gandhi Returns With Son Rahul From US Post Health Check-up Amid Ongoing Monsoon Session

“I had never expected Sonia Gandhi to visit us. Our life has been destroyed and we found a supporter in her (Sonia), Shahnaza said later as she wiped off her tears. Her husband, Mushtaq Ahmad Raina, who works as a labourer, said he had built a one-storey house with whatever little he had earned in his life but now nothing was left. “Whatever we had accumulated has been destroyed by the waters,” he said. Raina said they have asked both Sonia and Rahul to help them construct a new house as the winters were approaching.

“We cannot live in these tents as the days go by and the weather gets cold. The winter is approaching and we do not know what to do,” he said.
The Congress leaders distributed relief material including ration-kits, traditional Kashmiri cloak ‘Pheran’ besides other cloth material for both men and women, and other daily use items among the affected people.