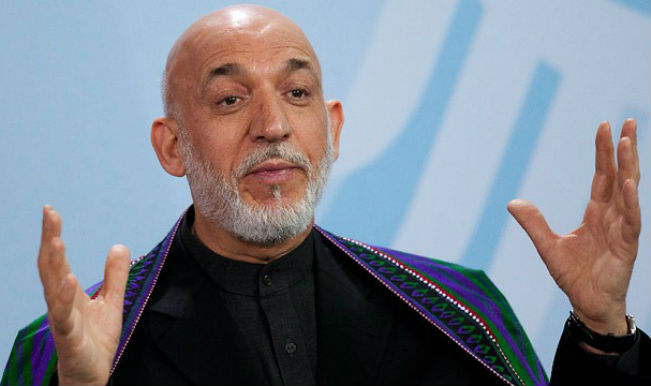 New Delhi, Nov 17: Foreign leaders Monday fondly recalled their countries’ links with India’s first prime minister Jawaharlal Nehru, with former Afghan president Hamid Karzai saying that Nehru was a household name in his country. Karzai was speaking at the inaugural function of an international conference on Nehru’s worldview and his legacy – Democracy, Inclusion and Empowerment – organised by the Congress to mark the 125th birth anniversary of Nehru. Also Read - Burj Khalifa in Dubai Displays Mahatma Gandhi's Images on His 151st Birth Anniversary

The session was also addressed by former Ghana president John Kufuor, Queen Mother of Bhutan Ashi Dorji Wangmo Wangchuck, former Nepal prime minister Madhav K. Nepal, and former foreign minister of Egypt Amr Moussa. Karzai, who had studied at Shimla, said he read an essay by Nehru and learnt about his “connectivity with the people of India”. He said Nehru saw India’s independence as a means of an improved lives for the people. Also Read - Gandhi Jayanti 2020: Google Launches Online Exhibition Of Postcards Inspired By Mahatma Gandhi

“Nehru, for us, was a name of household conversation,” Karzai said. Karzai, who spoke mostly extempore, said Nehru had explained that the slogan “Bharat Mata ki jai” (Hail Mother India) did not mean only land of India but also its people. He said Nehru linked India to the world “in the full light of India’s inheritance” and he “inspires all of us”.

Karzai said Nehru was not only Mahatma Gandhi’s disciple and student but also his “intellectual counterpart…faithful yet challenging”.

He said India not only gained independence but gave out message of non-violence, peace and co-existence. Nehru’s worldview was of equality. Keeping away from military blocks,” he said. Karzai also said India has a responsibility on the basis of principles on which it has evolved and hoped that it will continue to provide assistance to Afghanistan and other countries.

Karzai said Nehru’s dream had been fulfilled in many ways as India has evolved into a strong country. Kufuor said Nehru was an inspiration in his country’s aspiration for independence. Kufuor, who was Ghana’s president 2001-2009, said the Indian government had provided assistance in many sectors to Ghana.

“Nehru was a thorough nationalist. He championed the cause of marginalised. He was also great leader and a champion of world peace.” Kufuor said the only alternative to world peace was destruction. He said India was nuclear power, world’s largest democracy. He also referred to the country’s achievements in space, including its Mars mission.

Ashi Dorji Wangmo Wangchuck said Nehru had invited the king of Bhutan as the chief guest at Republic Day parade in the mid-50s and helped end the country’s policy of self-imposed isolation. She recalled that Nehru and his daughter Indira Gandhi had crossed into Bhutan “on a historic visit” in 1958 on horses and yaks.

She said Nehru and his daughter undertook the difficult journey through “rugged terrains” to visit India’s small neighbour and it was first time any head of a government had done so. “It won heart of people of Bhutan,” she said. She said Nehru also made it clear that India would act as a friendly neighbour and people in Bhutan were independent in choosing their way of life.

She said while Nehru laid the foundations, successive governments had strengthened the relations between the two countries. Wangchuck said relationship between India and Bhutan stands out as a shining example of relations between a small and large neighbour. She said Nehru was a gifted writer, intellectual of the highest order and exceptional international statesman.

Madhav K. Nepal said Nehru was deeply committed to socialistic values and was one of the most illustrious icons of modern India. “Nehru was an epitome of charisma, he was a genius, a great visionary and a prolific writer.” He recalled Nehru’s role in founding the Non-Aligned Movement (NAM) and said he was highly regarded in the Himalayan country.

Moussa recalled his country’s links with Nehru and said Nehru was an avid supporter of the ideals of the United Nations to sort out problems. “It’s importance cannot be emphasised enough,” he said. Recalling Nehru’s contribution to evolution of the NAM, Moussa said there were signs of cold war mentality.

“The change has been compounded by lack of global leadership… From eastern Europe to Africa, the middle-east to Asia, the world is on verge of turbulence,” he said. He said principles of NAM were relevant but in a new paradigm. Moussa said nature of conflict had changed and there were struggles along ethnic and religious fault lines leading to terrorism.

The Egyptian leader said he came from a region that faces major challenges. “Democracy is the way to the future,” he noted.