New Delhi: As a massive wildfire in the famed Dzukou Valley located on the border of Manipur and Nagaland, continue to burn, four Mi-17V5 Indian Air Force (IAF) helicopters resumed firefighting operations to douse the forest fire. During its battle against the wildfire, videos of an IAF chopper hovering over a water body to refill water in Bambi bucket has surfaced online on Sunday. The videos shows a chopper refilling a Bambi bucket which has an approximate capacity of 3500 litres and then proceeding towards the forest fire.Also Read - Nagaland Cop Launches 'Call your cop' Mobile App For Citizens | Deets Inside

One of the 4 helicopters of @IAF_MCC involved in fire fighting mission at Dzukou Valley, Kohima, in the process of refilling the Bambi Bucket from nearby water body.

A team of National Disaster Response Force (NDRF), forest and police personnel are also trying their best to extinguish the wildfire in the Dzukou range in Nagaland’s Kohima district, officials said.

The fire broke out in the Dzukou range in Southern Angami region of the district on Tuesday (December 29) afternoon. The scenic Dzukou valley, a tourist hot spot in Nagaland, is located in the Dzukou range. The District Forest Officer (DFO), Kohima, Rajkumar M said IAF choppers have dropped 24,000 litres of water to extinguish the wildfire in 12 sorties.

He said that ground operations to extinguish the fire were carried out by Nagaland Police, Forest, NDRF, SDRF and SAYO volunteers on Sunday. 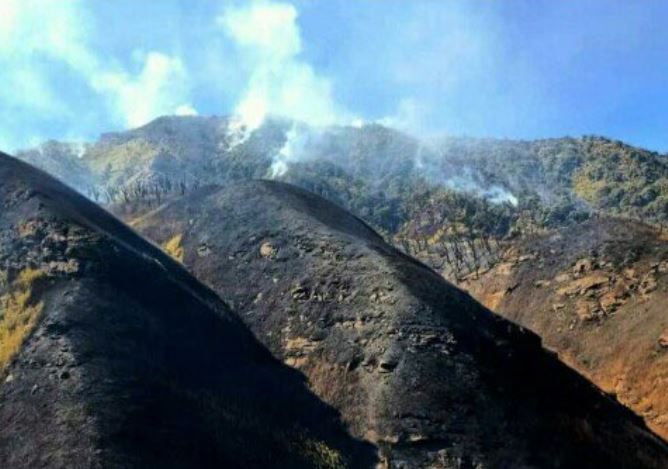 The DFO said the fire is under control as reported by the pilots and the teams are trying to prevent it from spreading to the Dzukou valley.

To maintain seamless communication with the ground operation team, Kohima Police has set up a control room at Dzukou entry point at Viswema village and two relay stations also set up in the Dzuku base camp, he said.

The DFO said that Kohima Forest Division and SAYO volunteers had already cut a 5 km fire line on December 31 while another 2 km fire line was cut by SAYO volunteers on January 1. This was done to prevent the fire to spread to the Dzukou valley, he said, adding that they were assisted by Kohima Police and State Disaster Response Force.

Meanwhile, the president of Southern Angami Youth Organisation (SAYO) Zakieletuo Tsukru claimed that around 10 square kilometre of Dzukou range has been razed by the wildfire.

SAYO volunteers along with personnel of Kohima Forest Division, Police and Fire and Emergency Services have been engaged in fighting the fire in an effort to contain its spread since day one, he said.

Briefing reporters at Viswema Village, Tsukru said that as per the latest communication from the volunteers who are up there at Dzukou valley the fire which was in the Southern range till Saturday is slowly spreading down towards the western side of the valley.

The SAYO president said: “We detected the fire at Dzukou halfway during the afternoon hours on December 29. It was reported that some people have trespassed into the Dzukou valley from Kezotsa after which the wildfire was reported, as reported by the caretakers of the valley”.

“On receiving the information, we dispatched SAYO volunteers to intercept those trekkers while 21 of them were initially reported to be spotted by the villagers. However, the volunteers could not intercept anyone,” he said.

“Our suspicion is that the trekkers have fled towards the Kezotsa in Manipur side,” he said.

The SAYO president also urged upon the people visiting the valley to be more careful and follow all necessary instructions printed in the tickets issued by the SAYO.