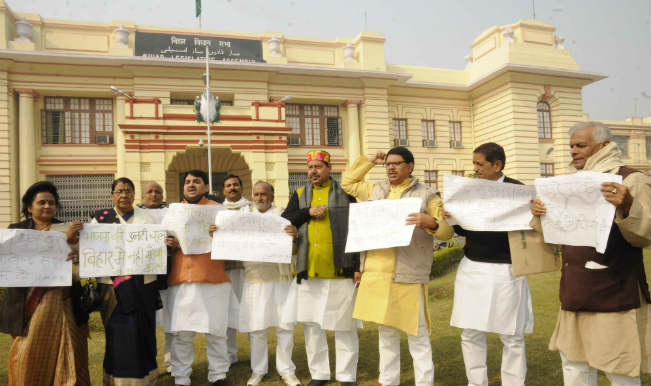 Patna, Dec 27: Four JD(U) MLAs were today disqualified from Bihar Assembly under anti-defection law for anti-party activities, including cross voting in Rajya Sabha election. With this, membership of eight rebel JD(U) MLAs has been terminated since last month by the Assembly Speaker following the party’s recommendation after the legislators were accused of backing two independent candidates Anil Sharma and Sabir Ali for Rajya Sabha seats in June polls instead of party’s official candidates. Also Read - Bihar Elections 2020: Former DGP Gupteshwar Pandey to Join JD(U), Likely to Contest Polls From Buxar

The disqualified MLAs are Ajit Kumar (Kanti,Muzaffarpur), Raju Singh (Sahebganj, Muzaffarpur), Poonam Devi Yadav (Bigha, Patna) and Suresh Chanchal (Sakra, Muzaffarpur). The legislators cried foul alleging that were not given a proper chance to present their case and would move court against the decision. The development does not pose any threat to JD(U) government in Bihar as RJD, Congress, CPI and three Independents continue to extend outside support to it since last year. Also Read - Bihar Assembly Elections 2020: NDA is One, Will Contest Polls Together, Says Ravi Shankar Prasad

Speaker Uday Narayan Chaudhary today passed the order in the presence of four legislators against whom the ruling party had initiated proceedings for termination of their membership for anti-party activities, Assembly secretary in-charge Hareram Mukhiya told PTI. Chaudhary disqualified these four rebel JD(U) MLAs under the provisions of the anti-defection law, Mukhiya said.

The JD(U) Chief Whip Shrawan Kumar welcomed the Speaker’s decision and said that the disqualified lawmakers deserved punishment for working against their party. In a strong warning to other rebel ruling party MLAs, he said they should also be prepared for strict and anti-defection proceedings would be initiated against them soon in an incremental manner. The Speaker had reserved his order on disqualification proceedings against these four JD(U) MLAs last month, the Legislative Assembly secretary in-charge said.

With disqualification of four MLAs, the JD(U)’s strength has come down to 111 in a 243-member Assembly. The BJP has 88 members in the House followed by RJD (24), Congress (5), CPI(1) and Independents (5). Suresh Chanchal, whose Assembly membership was terminated, alleged that the legislators were not given proper chance to present their case during hearing of disqualification proceedings against them.

The Speaker had passed a unilateral verdict after meting out similar treatment to four others, Chanchal alleged. Chanchal said that they would move court challenging their disqualification from the House as all of them had faith in the judiciary. However, Shrawan Kumar, who is also the Rural Works Minister in Jitan Ram Manjhi government, said, “these four MLAs had broken party discipline and indulged in anti-party activities by working for another party which the party leadership took note of and initiated proceedings against them under the anti-defection law”.

“You cannot remain member of one party and work for another as it amounts to breach of discipline and indulgence in anti-party activities,” Kumar, a close aide of the former chief minister Nitish Kumar, said. The rebel MLAs include Rajiv Ranjan who was recently suspended from the party for six years after he was made NDA’s Nalanda district convenor despite being a ruling JD(U) MLA.

The suspended JD(U) MLA had dared the party leadership to take whatever action it deemed fit and said that he would not move court even if he was disqualified from the House under the anti-defection law. The MLAs disqualified last month were Gyanendra Singh Gyanu, Neeraj Singh Bablu, Ravindra Rai and Rahul Sharma.