The police is scrutinising the CCTV cameras in nearby areas to find the people who could be behind this act.

New Delhi: In yet another ‘Free Kashmir’ controversy to hit Bengaluru, the words were found scribbled on the walls of a National Cadet Corps (NCC) compound in Major Sandeep Unnikrishnan enclave on Monday. Also Read - Watch: 'Was Only Speaking For Their Rights': After 'Free Kashmir' Controversy, Woman Releases Video in Defence

The police have started investigating the case and are scrutinising the CCTV cameras in nearby areas to find the people who could be behind this act. Speaking to news agency ANI, Dr Sharanappa SD, DCP East, Bengaluru, said, “Some objectionable writings were found on the compound walls in the city. We are registering a case under the Karnataka Open Places (Prevention of Disfigurement) Act.” Also Read - 'Free Kashmir' Poster Raised at Mumbai Protest Against JNU Violence Sparks Outrage; Sena Says This Won't be Tolerated 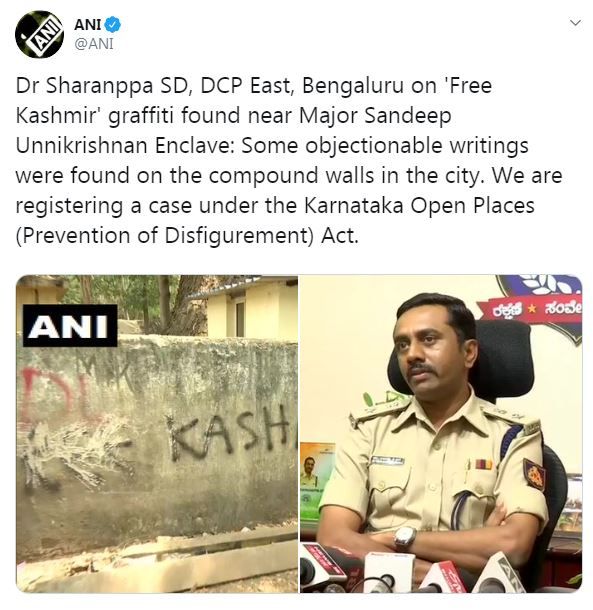 According to reports, while in the past several anti-CAA, NRC, NPR graffitis, as well as those against PM Modi, RSS etc., have been found on the walls of the city, the ‘Free Kashmir’ graffiti is a new trend in the city.

Last month, an activist holding a ‘Free Kashmir’ placard had to be rescued by the Bengaluru Police after being spotted in a protest march called by the BJP against pro-Pakistan sloganeering at a rally addressed by AIMIM chief Asaduddin Owaisi.

In January, a Mumbai-based activist was seen holding a ‘Free Kashmir’ placard in a protest at the Gateway of India against the mob attack at the Jawaharlal Nehru University (JNU) campus. After massive outrage, however, she clarified that she was only speaking about the rights of the Kashmiri people and against continued internet blockade in the Valley.