From June 1, no Fuel Sans Helmet in Noida, Greater Noida

The plan is to eventually implement the order in the rural areas as well after feedback from all stakeholders.

Noida: From June 1, two-wheeler riders in Noida and Greater Noida will not get petrol at fuel stations if they go without helmets. (Also read: Sikh Cyclist’s Disqualification For Refusing to Wear Helmet Not Discrimination, Rules SC)Also Read - Noida-waasiyon, Get Set For Next Slew Of Development Activities Coming Up Soon

In a bit to promote road safety, the district administration made the announcement on Tuesday. District Magistrate Brajesh Narain Singh held a meeting with owners of the filling stations where he said the order must be implemented in the two cities and later it would also be rolled out in rural areas of Gautam Buddh Nagar. Also Read - Noida Man Charged Rs 3000 For Uber Ride From Delhi Airport To Home On A Sunny Day

Addressing the fuel station owners, Singh said, “Those who reach your fuel stations without a helmet should be told that they will only get fuel if they wear a helmet. This practice will be implemented from June 1 in Noida and Greater Noida cities initially.” Also Read - Woman Slaps E-rickshaw Driver Repeatedly For Grazing Past Her Car In Noida, Arrested; Video Goes Viral

Singh, who was accompanied by District Police Chief Vaibhav Krishna, said the initiative would later be rolled out in rural areas of Gautam Buddh Nagar after receiving inputs and feedback from the stakeholders. 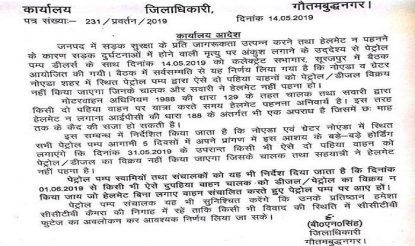 The DM’s order for two-wheelers

This time the administration has decided on legal action as well for the errant drivers. It includes suspension of driving license for not wearing helmet and arrest if riders without helmet misbehave with staff at fuel stations.

“When those without helmet reach filling stations, their details and vehicle numbers would be traced through CCTV footage and legal action initiated against them. Their driving license can also be cancelled,” the administration said in a statement.

It added, “In case anyone misbehaves with the staff at the filling stations, strict action would be taken against the errant person and they could even be jailed under Section 151 of the Criminal Procedure Code (CrPC).”

According to the Section 129 of the Motor Vehicles Act, 1988, not wearing a helmet while riding a two-wheeler is a violation of the law and can draw imprisonment up to six months under Indian Penal Code Section 188.

All fuel stations in Gautam Buddh Nagar have been instructed to carry out publicity on their premises about the upcoming regulation and consequences of rule violation.

The administration has instructed them to publicise the order on their premises in the next five days. The awareness drive would be conducted from May 27 onwards.