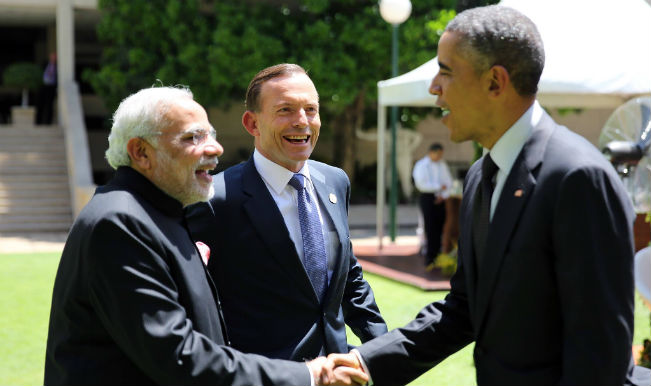 Prime Minister Narendra Modi on November 15 carried on with his hectic international diplomacy holding parleys with world leaders, including US President Barack Obama, over bilateral meetings and informal discussions on the fifth day of his whirlwind three-nation 10-day tour. More meetings are on the anvil during the remaining days in Australia and Fiji, where he will be making a day-long visit. Also Read - PM Modi Embarks On 3-Day Visit to Rome, The First by an Indian Prime Minister in 12 Years | Here's What is on Agenda

It was a warm hug for Australian Premier Tony Abbott by Modi — described by the Australian media as a “standout shake” so far at the G20 summit — that was distinct from the formal handshakes with the host by other world leaders. Dressed in a black bandhgala suit, Modi narrated an anecdote to President Obama and Abbott during the G20 retreat, sharing with them the story of Chicago-based Walter Burley Griffin, the well known American architect who designed the new Australian capital Canberra and who was buried in Lucknow.

Modi is due to meet German Chancellor Angela Merkel and Spain’s Premier Mariano Rajoy tomorrow. Australian daily The Age while referring to Abbott-Modi hug: said, “The stand out shake so far has been India’s Prime Minister Modi, who gave Abbott a hug. An ‘awww’ could be heard across the media centre. There were no hugs from Abbott besties David Cameron and Stephen Harper. We repeat, no hugs.” Abbott also joined in the tweet exchanges when he made a mention of barbeque lunch hosted by him during the retreat at the Queensland Parliament House.

The Australian leader posted a photo of Modi sharing a lighter moment with Obama and himself during the retreat. “The BBQ lunch with @narendramodi and @BarackObama was an opportunity for #G20 Leaders to talk in a relaxed atmosphere,” Abbott posted. Modi kicked off his bilateral diplomatic engagements on the margins of the back-to-back India-ASEAN and East Asian summits after he landed in Myanmar capital Nay Pyi Taw, holding several meetings.