Over 74 lakh voters will decide the political fortunes of 1,122 candidates in 150 divisions in one of the most bitterly-fought polls for any municipal body in recent times.

New Delhi: Amid tight security with long queues of people at several polling stations, voting for Greater Hyderabad Municipal Corporation (GHMC) began at 7 AM on Tuesday. Over 74 lakh voters will decide the political fortunes of 1,122 candidates in 150 divisions in one of the most bitterly-fought polls for any municipal body in recent times. In the wake of the novel coronavirus, wearing of face mask is mandatory for voters coming to polling stations. Authorities have made it clear that those not wearing masks will not be allowed into the polling station. A total of 74,67,256 people are eligible to cast their votes. The electorate constitutes 38,89,637 men, 35,76,941 women and 678 others.Also Read - #ZeeOpinionPoll Purvanchal (UP): SP Gains Major Ground But BJP Ahead on Seat Count | LIVE

6.00 PM: About 35 per cent of the 74 lakh-odd voters turned up to cast their votes. Counting of votes will be taken up on December 4. Also Read - UP Elections 2022: This Is How Akhilesh Yadav Is Planning To Become CM, His Winning Strategies Revealed

The Telangana State Election Commission (SEC) ordered repoll in all 69 polling stations of Ward number 26 after it was found that the symbol of CPI(M) was printed in the ballot paper instead of CPI. The repoll would be held on December 3 from 7 AM to 6 PM in all the 69 polling stations.

18.20 per cent voter turnout was recorded in GHMC polls till 12 noon today.

12.19 PM: The state election commission has imposed a ban on exit polls as re-polling will be conducted in few polling booths due to technical issues.

12.18 PM: TRS leader K Kavitha casts her vote at Greater Hyderabad Municipal Corporation (GHMC) election in Hyderabad. “We want the people of Hyderabad to come & vote. It is a privilege to have the right to vote. If you don’t vote, you won’t have any right to question,” she said.

10.45 AM: There are 150 wards in the Greater Hyderabad Municipal Corporation. The mayor’s post is reserved for a woman this time. Elections are conducted with ballot papers in view of the COVID-19 pandemic. 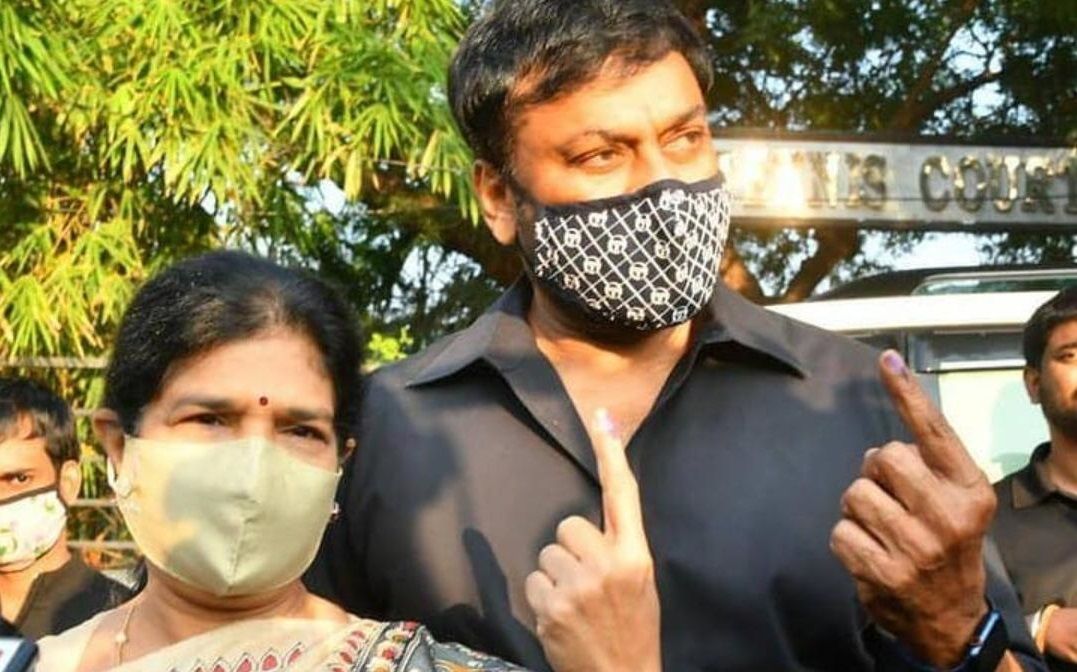 10:00 AM: Megastar Chiranjeevi And His Wife cast his vote in GHMC Elections.

08:00 AM: AIMIM President Asaduddin Owaisi casts his vote for #GHMCElections2020. “I appeal to the people of Hyderabad to cast their vote today to strengthen democracy,” he said.

07: 20 AM: Union Minister of State for Home Affairs G Kishan Reddy was one of the big names who reached the polling station early to cast his vote.

Notably, the elections are being fought without any alliance among the parties. While ruling Telangana Rashtra Samithi (TRS) is looking to retain power in the municipal body,  upbeat over its victory in Dubbak Assembly by-election, the Bharatiya Janata Party (BJP) is making a determined bid to wrest power.

The Congress and the Majlis-e-Ittehadul Muslimeen (MIM) are also contesting the polls on their own. In 2016 elections, the TRS had won 99 seats while MIM had finished second with 44 seats. The BJP could win only four seats then.