"I am presenting the performance and track record of two and half years allowing the people to draw their own conclusions," he said. 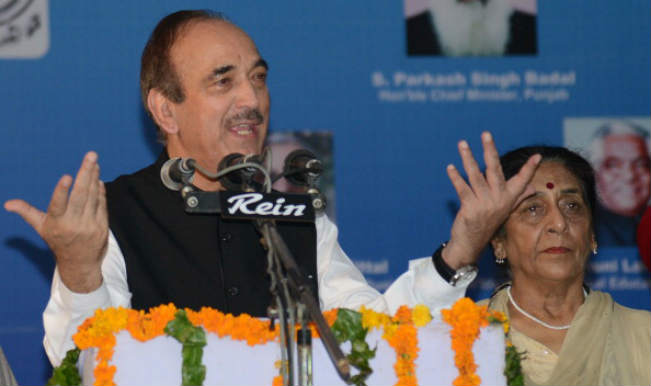 He expressed his views while on campaign trial at the end of campaigning of the second phase of polls in Jammu and Kashmir. Azad said it is the contribution of the Congress-led government to create an urge and awakening about the concept of development which has compelled other parties to include development in their agenda. “However, none of them have any proven credentials and a track record, as they have been getting votes merely by exploiting the people of the state on the basis of religion, region and hollow slogans,” the Congress leader said. Also Read - Bihar Assembly Election 2020: Migrants Walked Kms Without Food & Water, Did PM Help You Then, Asks Rahul | Highlights

“Youth of the state want fast-paced growth, modern infrastructure and creation of employment opportunities, and political parties of the state are selling them catchy slogans, hollow promises, vision documents and utopian frameworks,” Azad said. “I am presenting the performance and track record of two and half years allowing the people to draw their own conclusions,” he said.

Azad said the Congress-led government has shown the way in the execution of mega projects like roads, hydro-power, colleges, schools and hospitals, in a time bound manner, in addition to providing an efficient, credible and pro-people governance to the state inspite of the hurdles created by alliance partners, and other anti-progress forces.

Describing the construction of Mughal road as one of the landmark achievements of Congress government, Azad stated that the re-opening of the historical route has alleviated the hardships of the people of this far off and distant area of PirPanjal and opened new avenues of progress and prosperity. He said since the laying of foundation stone by Manmohan Singh, the then Prime Minister in March 2006, the execution of Mughal road was done in a fast-track mode to fulfil the long pending aspiration of the people of PirPanjal.

“UPA government liberal funding by way of revising the project cost from meagre Rs 225 crore to Rs 640 crore under Prime Minister’s Reconstruction Programme and Congress-led Government’s fast-tracked execution led to the creation of a viable alternate connectivity for the people of Pir Panjal in a short span of two and a half years,” said Azad. “No other political party can claim credit of having executed big projects in such an efficient and speedy manner in Jammu and Kashmir as has been done by Congress-led government,” he said.

Urging the people of PirPanjal to give decisive and convincing mandate to the Congress, Azad assured the voters to craft a new, empowered and progressive PirPanjal which will be an abode of prosperity, harmony and progress. Azad said as chief minister of the state, he frequently visited this region and attempted to bring this far off and remote area on the developmental map of the state in tune with his policy of equitably and judiciously spreading the fruits of development and progress to all the regions and sub-regions of the state.

Recalling his efforts towards operationalising the cross-LoC Trade and opening the route of Chakkan da Bagh, Azad said he personally supervised the construction of infrastructure on the LoC to ensure its completion in the shortest possible time. Expressing happiness over the success of UPA governments’ initiative of promoting cross-LoC interaction and trade, Azad said it has not only enabled the divided families to meet each other, but has also generated employment and trading opportunities for the business communities on both the sides.