Google does it again! Indian Prime Minister Narendra Modi’s name listed under the most stupid prime ministers in the world

Type 'most stupid prime minister' on Google search and you will be shocked seeing pictures of Prime Minister Narendra Modi in results.

Type ‘most stupid prime minister’ on Google search and you will be shocked seeing pictures of Prime Minister Narendra Modi in results. Yes, you heard it right. Search engine giant Google listed Narendra Modi under the category of the most stupid prime minister in the world. The list also includes Thailand’s ex-prime minister Abhisit Vejjajiva, John Key, Prime Minister of New Zealand, among others. Also Read - 4-Day Tika Utsav Begins Today, Special Drive to Vaccinate Maximum Eligible People | All You Need to Know 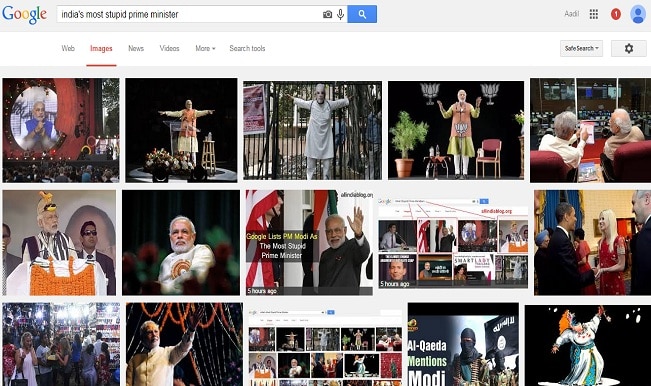 The story doesn’t end here. If you search ‘india’s most stupid prime minister’ on Google, Modi’s images appear in results. Narendra Modi, who became PM with a huge majority, is considered one of the best prime ministers of India, according to many Indians. Also Read - 'Glad They Are Taking My Clubhouse Chat Seriously', Prashant Kishor Reacts to Audio Clip Released by BJP

This is second time that Google targeted Indian Prime Minister. Earlier, the tech giant placed Narendra Modi under Top 10 Criminals of the world that resulted in an outrage on social media. Later, Google apologised for the mistake. Indeed, it’s not Google’s fault as it doesn’t decide what images to place in a particular search.

Google navigates the web by crawling following links from one page to another. Google sorts the pages by their content and other factors and keeps track of it all in the index. As you search a particular word, the algorithms get to work looking for clues to understand better what you mean. Based on these clues, Google pulls out relevant content from the index. It ranks the content using over 200 factors including the freshness of the content, site quality, page quality and even user context, like region and web history. (ALSO READ: #Top10Criminals: Here’s how Twitterati was responsible for Narendra Modi image in Google search result for ‘Top 10 Indian Criminals’)