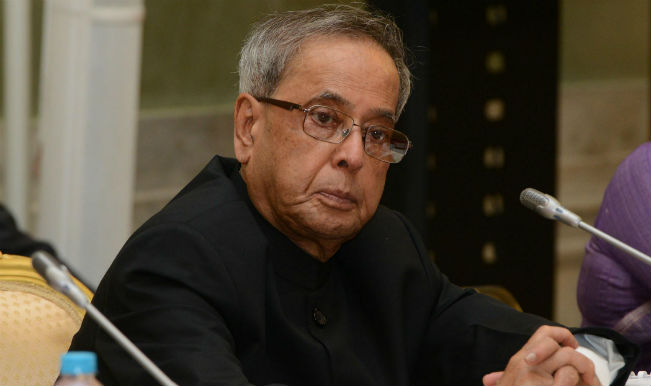 New Delhi, Nov 5: President Pranab Mukherjee today exuded confidence that the government’s policy initiatives will soon put Indian economy back on the high growth trajectory of 7 to 8 per cent. “A number of measures aimed at investment revival, strengthening macro-economic stability and ramping up infrastructure will certainly posit India back into the high growth trajectory of 7-8 per cent,” Mukherjee said at a SCOPE awards ceremony here. Also Read - With Focus on Infrastructure Development, PM Modi to Launch GatiShakti National Master Plan Today | Key Points

The President noted that the green shoots of recovery were already visible, with the economy growing at 5.7 per cent during the first quarter of current fiscal. “India today stands at the cusp of a transformative phase which, I firmly believe, will successfully place us in the league of developed nations over the next two decades,” he said. Also Read - Centre Restores Scheduled Domestic Flight Operations Without Restrictions From October 18

Mukherjee also expressed hope that inflation will be contained below five per cent through various policy interventions by the government. “Various steps taken towards fiscal consolidation have shown positive results. Inflation has decelerated over the past three months and we hope to contain it below 5 per cent through a judicious mix of policy measures,”

Referring to Prime Minister Narendra Modi’s Make in India campaign, which is aimed at transforming India into a global manufacturing hub, Mukherjee said: “I believe that our central public sector enterprises (CPSEs) have a vital role in making this a reality”. “We should aim not only at catering to our huge domestic demand but also towards high quality product development and greater access to foreign markets. This would not only create adequate employment opportunities for our youth but also raise standards of living across,” he said.

Pointing out that CPSEs are custodians of public wealth, Mukherjee stressed that they “necessarily need to ensure continued compliance with the best standards of corporate governance and transparency”. The state-owned firms like SAIL, HAL, BPCL and IOCL were among the PSUs conferred with the SCOPE Meritorious Awards 2012-13 on the occasion.

Speaking on the occasion, Union Heavy Industries & Public Enterprises Minister Anant Geete lauded the performance of CPSEs and their role in the country’s industrial development. He said they have emerged stronger and more efficient in the face of increasingly competitive scenario and are now ready to become global entities.

“I sincerely hope that the management of CPSEs will continue to take proactive steps in improving the performance of their respective CPSEs. “The Government as its part will continue to extend requisite support to our CPSEs so that they can play an even bigger role in the economic and industrial development of the country,” the Minister said.

“The empowerment policy framework through Maharatna, Navratna and Miniratna schemes has provided operational and financial delegation to the CPSEs enabling them to operate on commercial lines and enhance their performance,” he added. The CPSEs which were conferred awards have been selected for performing well in various fields like corporate governance, corporate social responsibility, environment and sustainable development, human resource development and technology development & innovation.