But he has not yet visited the regional passport office in Srinagar to give his biometric data and photograph. 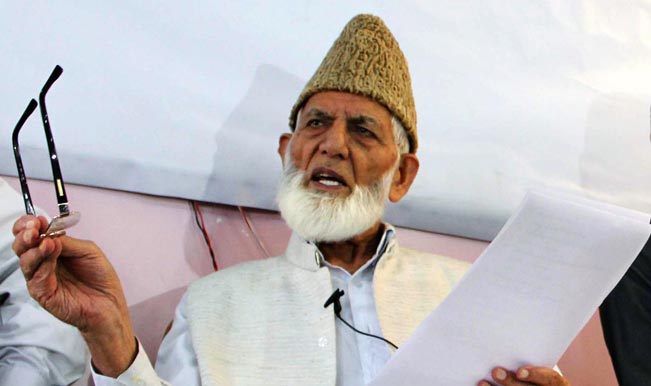 New Delhi, May 22: Government today said it will consider the passport application of hardline Hurriyat leader Syed Ali Shah Geelani only after he completes the formalities and indicated that it was not averse to approving it. “If it comes to us after due formalities, we will think over it…. We have no objections,” Home Minister Rajnath Singh told reporters. (Read: Syed Ali Geelani gets Indian passport on ‘humanitarian’ grounds) Also Read - From West to East: Maharashtra’s Ruling Shiv Sena to Contest West Bengal Polls This Year

The Home Minister was asked whether the central government will give passport to the Kashmiri separatist leader. Singh was speaking on the sidelines of a function here. Yesterday, the External Affairs Ministry had said the passport application of Geelani cannot be processed in its present form as it was incomplete as he has not yet submitted passport fees, biometric details and photographs. The Home Ministry had said passport is the right of every Indian citizen and is issued by the Ministry of External Affairs after following due process. Also Read - Tripura Congress Chief's Car Attacked Allegedly by BJP Workers, Party Calls For Strike

“In case any applicant applies for the passport, he should fulfil all the formalities before his case is processed. As and when the matter is referred to the Ministry of Home Affairs, we will process the case on merit,” a Home Ministry spokesperson said. Jammu and Kashmir’s ruling coalition partners PDP and BJP are sharply divided over the Geelani passport issue. PDP has said it would approach the Centre for giving passport to Geelani on “humanitarian” grounds while BJP has said he should not be given the travel document till he “apologises” for his anti-national activities.

Sources said Geelani and his family members want to travel to Jeddah and have applied for passports online.But he has not yet visited the regional passport office in Srinagar to give his biometric data and photograph. As per the new rules, an applicant must visit the passport office in person to give biometric details and get photograph clicked.