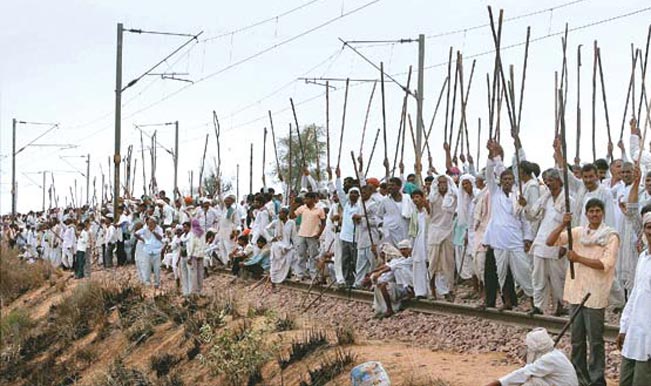 Jaipur, May 21: Members of Gujjar community today revived their agitation demanding five per cent reservation in government jobs by disrupting rail traffic in Bharatpur, police said today. The demonstartors sat on a dharna on railway tracks blocking the Delhi-Mumbai tracks near Pilukapura in Bharatpur, police said. Six trains have been initially affected on the route and alternate arrangements were being made, an?official of the Kota division of west central railway informed.(Also read: JD(U) leader K C Tyagi criticises Narendra Modi govt over Jat reservation) Also Read - This Company is Paying its Employees ₹ 4 Lakhs for Just Wearing Slippers 12 Hrs a Day

“We demand five per cent reservation for the community people and it is for the government to resolve the matter. Our people will call off the agitation only after the demands are met,” Himmat Singh, the spokesperson of the Gujjar Aarakshan Sangharsh Samiti told PTI. A decision to carry forward the agitation was taken after a meeting with the people belonging to the community, he said. Gujjar leader Kirori Singh Bainsla, who spearheaded the Gujjar agitations in the past, began a ‘Nyay Yatra’ on May 11 in view of the reservation issue. The yatra will culminate today in Bharatpur. Also Read - Indian Army 2021: Apply For 194 Religious Teachers Post At joinindianarmy.nic.in NOW

“Our demand is five per cent reservation under the legal limit of 50 per cent. We are presently getting only one per cent under the limit of 50 per cent and we want four per cent more,” Singh said. Members of Gujjar community had yesterday threatened to revive their agitation demanding five per cent reservation in government jobs. In Jaipur, Chief Minister Vasundhara Raje had yesterday said that the government’s “doors are always open for the talks”. She told reporters in the party office that the matter of Gujjar reservation was subjudice. Also Read - Rajasthan RSMSSB Forester & Forest Guard Recruitment 2021: 1128 Vacancies Notified | Check Details & Apply ASAP

“The doors of the government are open for the talks,” she said. The community members have been demanding five per cent reservation since 2008.Meanwhile, Rajasthan Home Minister Gulab Chand Kataria said that the government was “open for talks” with the Gujjar community. “Some of the agitators tried to damage a portion of railway tracks but they were prevented by the community members,” he said in Jaipur. “They are squatting on railway tracks in Bharatpur. Trains have been directed and senior officers have been directed to maintain law and order,” Kataria said.