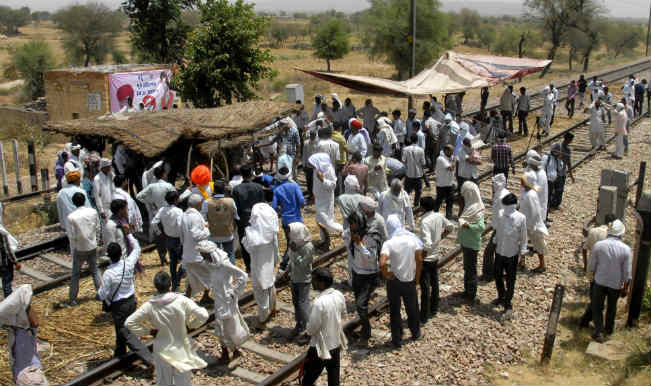 Mumbai, May 26: Frequent cancellation of trains on Delhi-Mumbai route due to ongoing agitation by Gujjars in Rajasthan is causing Western Railway a revenue loss to the tune of Rs 15 crore per day. “The revenue collection per day is dipped by Rs 12-15 crore as around 15-20 trains, including freight trains, are getting cancelled,” an official from commercial department of WR said here today. Gujjars have been blocking the rail track in Bharatpur district amid a stand-off with the government over their demand for five per cent reservation. (READ- Gujjar stir over reservation in government jobs continues in Rajasthan) Also Read - Mumbaikars Alert! 6-Hour Block on Western Railway to Affect Suburban Trains Services; 9 Locals Partially Cancelled

“It would have been a bit less hard hitting had only passenger services been affected. But unfortunately, freight services have also been cancelled which has added to our concerns,” the official said on condition of anonymity. Among trains cancelled so far were August Kranti Rajdhani Express, Golden Temple Mail, Mumbai Central-New Delhi Duronto Express, Mumbai Central-Firozpur Janta Express while dozens of trains are running behind schedule or are being operated through diverted routes. Also Read - Western Railway Recruitment 2020: 41 Vacancies For Engineers Announced | Find Here Link to Apply

When contacted, Western Railway Chief PRO Sharat Chandrayan said various alternatives are being worked out to ensure smooth flow of traffic. “We have explored the possibilities of running few trains such as Rajdhani Express and Paschim Express through diverted routes, which are reaching their destinations late by 8 to 10 hours,” he said. Chandrayan said WR has launched helplines, set up special refund counters and assistance booths at major stations, including Mumbai Central and Bandra Terminus, for the convenience of passengers.

Meanwhile, representatives of railway passengers have slammed the political leadership for “failing” to break the deadlock over the Gujjar agitation. “No government wants to displease the Gujjar community as they lack political will. I feel only court can solve this situation,” said Rajiv Singal, a Divisional Railway Users Consultative Committee (DRUCC) member.