The man, who is now detained, was videographed as walking and brandishing a gun in Jamia area earlier today shouting 'Kisko chahiye azadi (who wants freedom)? Yeh Lo Azadi (take this freedom)'. 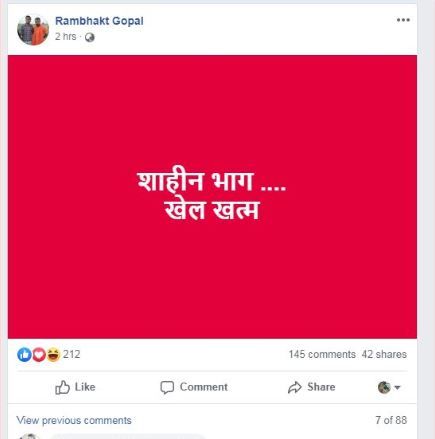 A student of the varsity, Shadab Najar, was injured in the firing and was immediately rushed to Holy Family Hospital in Jamia area.

Speaking to news agency ANI, South-East District (Delhi) DCP Chinmoy Biswal said, “Student (Shadab Farooq) has sustained injuries in his left hand. He has been referred to trauma centre from hospital. Doctors say he is out of danger. Apprehended person (Gopal) is being questioned.” The police identified the man as 19-year-old Ram Bhagat Gopal Sharma, a resident of Jewar area of Gautam Buddha Nagar District, Uttar Pradesh.

Social media users, including senior journalists, activists, students and politicians, have been fuming over the incident as they reacted to the Delhi Police complacent, ‘standing by’ against the man brandishing the gun.

The episode resonates strongly to another incident that took place two days ago when a gun-wielding man entered the Shaheen Bagh protest area. The man, however, later denied wielding the gun and said, “I always carry a gun wherever I go. I don’t know who took it out from my pocket.”

A few days ago, BJP leader Anurag Thakur had made a controversial statement raising slogans during a poll rally for the upcoming Delhi Assembly elections as he exhorted the crowd to chant ‘shoot the traitors’.

Jamia Millia University has been the eye of the storm since December when a protest against the Citizenship (Amendment) Act, 2019 turned into a clash between the students and the police on December 15. On Thursday, three students of Jamia were summoned by Delhi Police.