The Patidar leader, who joined the Congress last year, was arrested on Saturday in connection with a 2015 sedition case filed by the local Crime Branch in Ahmedabad after violence broke out during a rally by the Patel community in the city.

Priyanka, the party’s general secretary for Uttar Pradesh, tweeted: “The BJP is repeatedly harassing Hardik Patel who fights for the employment of youth and rights of farmers. He spoke up for the people of his society, asked for jobs for them and also asked for scholarships for students. He also launched a farmers’ movement.”

“The BJP is terming this sedition,” she added. 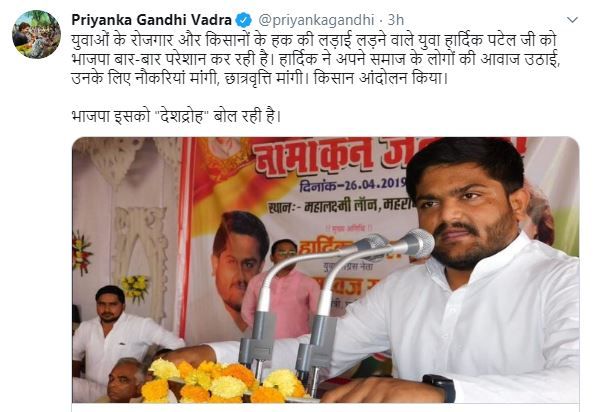 The 26-year-old, who joined Congress in March last year, was later produced before a magistrate in Ahmedabad and was sent to judicial custody till January 24. He was arrested near Viramgam after a non-bailable warrant (NBW) was issued against him in connection with the case.

The case dates back to 2015 when he was arrested for making ‘provocative speech’ in which he allegedly asked his supporters to kill the policemen rather than committing suicide for the cause of reservation, during the Patidar agitation. He was arrested on August 25, 2015 in connection with the sedition case filed by the Crime Branch following the violence that broke out during a rally by the Patel community in Ahmedabad.

He, however, has repeatedly asserted that there is no evidence against him in the chargesheet filed by the Crime Branch. He was granted bail in July 2016, and in November 2018, the court framed charges against him and other accused in the case.