It is the first time ever an Indian newspaper saw a matrimonial of a gay person. 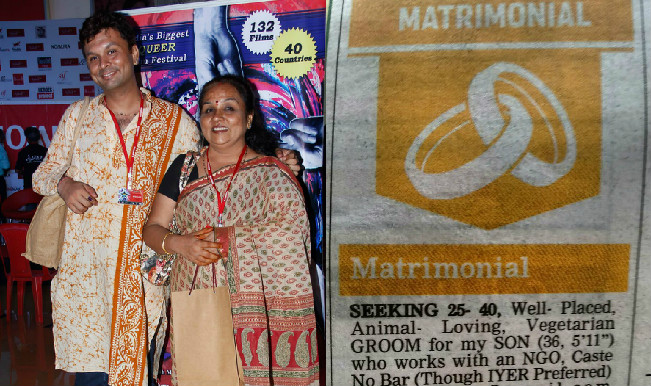 Also Read - Against All Odds: The Inspirational Journey of Karnataka’s First Trans-woman Doctor

The matrimonial ad of a mother looking for a suitable groom for her gay son has gone viral. Harrish Iyer, a known LGBT (lesbian, gay, bisexual, and transgender) activist’s mother Padma Iyer placed the ad in India’s leading newspapers looking for a groom. It is the first time ever an Indian newspaper saw a matrimonial of a gay person. Harrish has been fighting for equal rights for a long time now. (READ: Are you gay? The Goa State government knows how to make you ‘normal’!) Also Read - Matrimonial Ad Seeks Bride Who is 'Not Addicted To Social Media', Twitter Jokes ‘He Will Remain Unmarried Forever'

Although many newspaper organisations had rejected to place the ad, his mother, Padma, kept trying at various agencies to get the matrimonial ad printed. Finally, one newspaper agreed to her extraordinary request and published one-of-a-kind advertisement. The following is the matrimonial ad placed by Padma Iyer for son Harrish Iyer in a leading English newspaper. Also Read - Defying Government Ban on Public Gatherings Amid COVID-19, Thai Gay Activists Raise Pride Flags in Protest 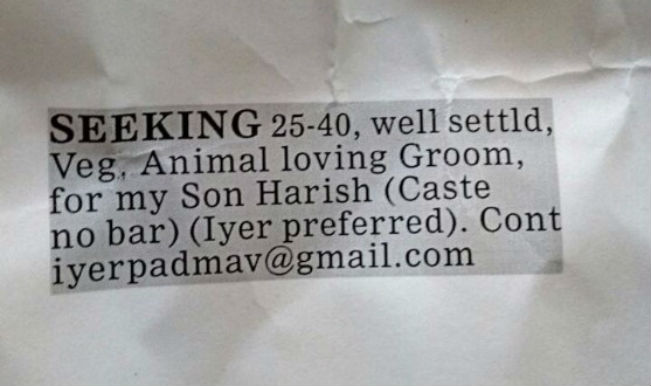 Harrish knew he was a gay since 14 years of age and came out to his parents then. Being a victim of child sex abuse, his mother believed that it was his orientation that caused this unruly behaviour towards him. However, the mother realised her son’s sexuality later on. He is the only Indian national to feature in The Guardian’s list of 100 most influential LGBT people in the world.

Supreme Court in its landmark decision said that gay marriages in India are illegal. The decision drew the ire of many on both social and mainstream media. The issues of LGBT have seen a widespread debate in India whenever a topic is picked upon to discuss. And now with a leading English daily publishing the first ever gay matrimonial ad, it will interesting to see if the people of gay community venture out with their orientations. Supreme Court had recently said that gay marriages in India are illegal.