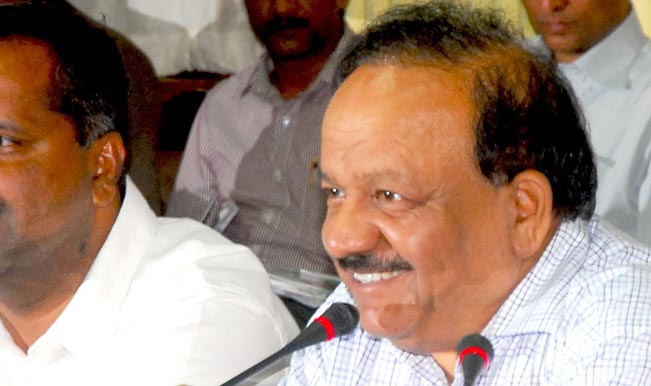 Also Read - PM Modi's Cabinet Reshuffle: Who is In, Who is Out. Full List Here

New Delhi, Nov 7 : Health Minister Harsh Vardhan Friday said that the request of the Medical Council of India’s (MCI) Chief Vigilance Officer for repatriation to his parent cadre has been accepted. “The person concerned has sent three requests to the ministry for repatriation to the parent cadre. So we are just acting upon his request,” he told the media on the sidelines of the 6th Ayush Congress here. Read – Harsh Vardhan : Ayurveda departments in all upcoming AIIMS Also Read - Govt Accepts Proposal To Increase Gap Between 2 Covishield Doses To 12-16 Weeks

He said that the request has been forwarded to the department of personnel and training. The minister said: “As far as intimidation and harassment are concerned, these are police and legal issues.” He added that as soon as he took over, he had formed a committee to look into issues of corruption in the MCI. Also Read - Why Not Start Door-To-Door Vaccination Proactively? Bombay High Court Asks Centre

MCI Chief Vigilance Officer (CVO) H.K. Jethi has written to the Central Vigilance Commission complaining of “victimisation and harassment” by the medical council administration. Jethi has sought repatriation to his parent cadre, the Indian Ordnance Factories Service (IOFS). Jethi is an 1996 batch IOFS officer and was appointed as CVO in MCI Oct 3, 2013 for two years.

The Central Vigilance Commission had also written to the health ministry to inquire into the matter and submit a report at the earliest. This comes close on the heels of the contentious removal of whistleblower Sanjeev Chaturvedi from the position of CVO, AIIMS.