Shivakumara Swamiji died on January 21 this year after prolonged illness.

In the letter to PM, Kumaraswamy said that Swamiji’s service to the people deserves recognition at the highest level through the award of Bharat Ratna. Also Read - Kejriwal Govt Urges Centre to Confer Bharat Ratna on Environmentalist Sunderlal Bahuguna

Listing his contributions, Kumaraswamy said the Shree Siddaganga Education Society, set up by the late Swamiji, has established more than 130 educational institutions, mostly in rural and semi-urban areas. Also Read - 'Fortunate to be an Indian', Ratan Tata Urges Twitterati to Discontinue Campaign Demanding Bharat Ratna For Him 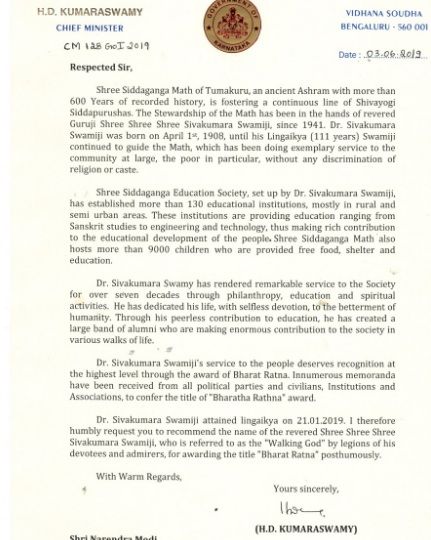 “These institutions are providing education ranging from Sanskrit studies to engineering and technology, thus making rich contribution to the educational development of the people,” he said.

Furthermore, he added that Shree Siddaganga Math hosts more than 9,000 children who are provided free food, shelter and education.

Shivakumara Swamiji, the 111-year-old head of the Siddaganga Mutt, known as the ‘Walking God’, died on January 21 this year after prolonged illness.  A recipient of Padma Bhushan and Karnataka Ratna awards, the seer was in a serious condition and had undergone a surgery at a private hospital in Chennai for his liver related complications.