The Indian Meteorological Department (IMD) said that the rains would be witnessed for two hours and will subside after that.

New Delhi: The national capital and its surrounding regions on Saturday witnessed heavy rains along with hailstorm and thunderstorms, triggering traffic jams on several roads, including on many busy stretches, across the city. Also Read - Delhi Rains: Downpour, Thunderstorms to Continue Till Saturday; Will Change in Temperature Impact Coronavirus Spread? 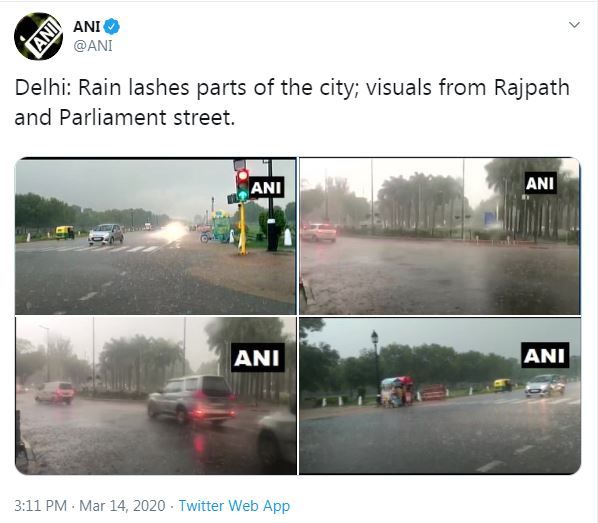 Earlier today, the city had woken up to a cloudy morning, with the minimum temperature being recorded at 16.4-degree celsius, a notch above the season’s average, the Indian Meteorological Department (IMD) said. Also Read - Delhi Rains: Light Shower Brings Respite From Heat, Similar Conditions to Prevail For 3-4 Days

The humidity level, at 8:30 AM today, was recorded at 88%. In a tweet, the IMD said that in central Delhi, a moderate rain, along with a moderate thunderstorm and hail activity, would be witnessed for the next two hours and will subside after that.

“A very small ( about 5 km*25 km*8 km dimension) but intense convective cloud is located over central parts of Delhi, which is likely to cause moderate rain along with moderate thunderstorm and hail activity during next two hours. It will subside thereafter,” the tweet said. 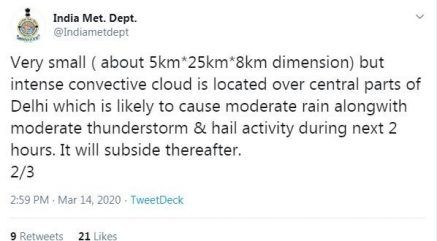 The rain also led to a dip in temperature. The sky is likely to remain cloudy with more showers expected in the evening.