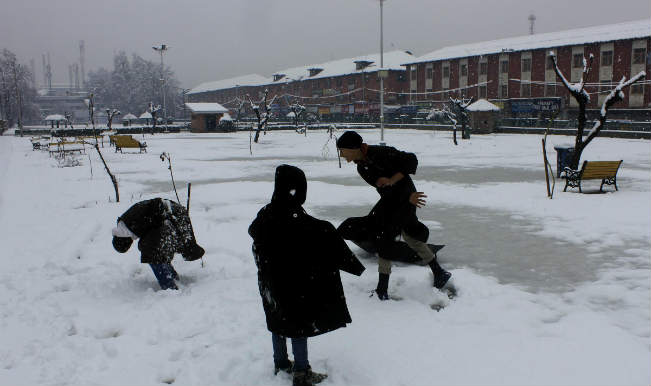 Srinagar, Mar 16: A 4-year-old girl was killed in a landslide triggered by snowfall and rains in the last 24 hours in Kashmir, which also forced closure of the Srinagar-Jammu National Highway even as air traffic remained suspended. Huda Jan was killed when she was buried under a landslide at Sunergund in Awantipora area of south Kashmir, Pulwama district last evening, a police spokesman said. (ALSO READ: Rains continue to lash Kashmir; fresh snowfall at some places) Also Read - International Flights: Govt Makes Big Announcement, Says Flight Services From Srinagar to Sharjah to Start Soon

While incessant rains lashed most parts of the Valley yesterday, moderate to heavy snowfall was reported since wee hours this morning. A traffic department official said the 300-km Srinagar- Jammu Highway has been closed for vehicular movement following landslides at several places due to the heavy downpour in the Valley and along the Pir Panjal mountain range. He said with adverse weather forecast for the next 24 hours, the road is unlikely to be opened for traffic today. Also Read - 2 Pilots Killed as Army Helicopter Crash Lands in Jammu and Kashmir's Udhampur

The arterial highway is the only all-weather surface link between Kashmir and rest of the country and gets closed during winter months due to landslides. An official at Srinagar International Airport said no passenger flights have arrived here since morning due to inclement weather. The downpour has led to snapping of electricity supply in many parts of the Valley, including Srinagar city, the summer capital of the state, officials said.

Waterlogging has also been reported from nearly two dozen areas of the city, they said. Deputy Commissioner Srinagar Farooq Ahmad Lone said dewatering operations have been launched at 17 sites so far. “We are making arrangements for dewatering from all areas where waterlogging has been reported,” he added. Traffic jams reported from several areas of the city even as traffic moved at a snail’s pace in other parts of Srinagar.