GMCH Polls: For counting of votes, each ward will have 14 counting tables and each table will have one counting supervisor and two counting assistants.

GHMC Election Results 2020 LIVE Updates: The counting of votes for the Greater Hyderabad Municipal Corporation (GMCH) polls started at 8 am on Friday. There are a total of 150 wards in GMCH which have been further divided into 30 circles. According to the reports, 8,152 counting staff are involved in the process, along with 31 counting observers. The authorities have installed CCTV cameras at counting centres to ensure transparency. Officials said 14,000 votes are being counted in one round and postal ballots are being counted first.Also Read - Telangana Develops India's First eVoting Solution, To Hold Dummy Polls on Oct 20

1o.40 pm: Results for GHMC Elections 2020 have been declared. The TRS has emerged as the single largest party by winning 55 seats while the BJP has made significant electoral inroads in Hyderabad by winning in 48 wards. On the third spot, Owaisi-led AIMIM bagged 44 seats while the Congress party only won 2 seats.

1o.30 pm: In compliance with court orders, counting of votes in Neredmet ward has been put on hold.

He adds, “The people of Hyderabad have made it clear what will be the results of the Telangana assembly elections (2023). I can say with confidence that people of Telangana have decided to say goodbye to the corrupt KCR government.”

8.50 pm: “I thank people of Hyderabad who chose TRS as the single largest party to represent them in Council. Result is certainly not what we expected, we’re short of 20-25 seats. We lost about 10-12 divisions with extremely narrow margin,” says KT Rama Rao, Telangana minister after GHMC results.

Gratitude to the people of Telangana for reposing faith in PM @NarendraModi led BJP’s Politics of Development.

I applaud the hard work of our karyakartas of @BJP4Telangana.

8 pm: “TRS had 99 seats in Hyderabad, this has come down to 55 now. We had 4 seats and we have won 50 as of now. The number of seats of AIMIM has also gone down, the same goes for TRS. BJP has today emerged as a strong party,” says MoS (Home) G Kishan Reddy.

“Today’s results indicate that we have blessings of the people in our efforts to bring BJP govt in Telangana in 2023 elections. TRS has failed, people are against their dynasty rule and corruption. People have paved a way for a BJP govt in Telangana, in the days to come,” he added. 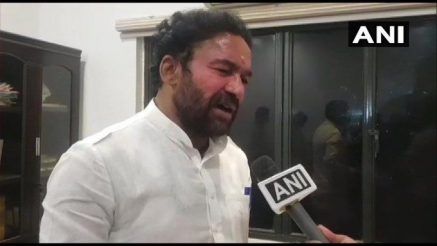 “TRS is winning in most seats. As voting was by paper ballot we have to wait 3-4 hours to get exact numbers. I believe BJP numbers will further decline and heavy support for TRS will surface. We will have our mayor and do public works uninterrupted,” said Kavitha, Telangana Chief Minister K Chandrashekar Rao’s daughter.

The Telangana Rashtra Samithi (TRS) is leading in 64 seats, AIMIM 34, the Bharatiya Janata Party (BJP) 31 and Congress in 3 seats.

As the initial trends have suggested, @BJP4Telangana has set its place as a dominant force in the state and is now ready to give TRS a run for its money.

The regime of TRS has its days numbered…#GHMCResults

10.35 am: The transformation has started in Telangana. You have seen Lok Sabha election results then Dubbaka byelection and now GHMC. Let us wait till the evening, but it is clear message to TRS that people want change: Telangana BJP MP D Arvind.

10.00 am: The Bharatiya Janata Party (BJP) is leading in 80 seats while the Telangana Rashtra Samithi (TRS) in 29 seats.

7.40 am: Counting of votes to begin shortly.

6.41 am: Greater Hyderabad Municipal Corporation (GMCH) is one of the largest municipal corporations in the country.

For counting of votes, each ward will have 14 counting tables and each table will have one counting supervisor and two counting assistants. This year, 34,50,331 voters casted their votes out of 74,67,256 eligible voters.

The Greater Hyderabad Municipal Corporation (GMCH) is one of the largest municipal corporations in the country. It spreads across four districts of Telangana — Hyderabad, Rangareddy, Medchal-Malkajgiri and Sangareddy. The area under the corporation also includes 24 assembly and five Lok Sabha constituencies of Telangana.