Reports suggest that opposition parties in Pakistan raised 'shame shame' slogans against Prime Minister Imran Khan in the Parliament on Tuesday, in wake of India's air strike in PoK.

Members of the opposition parties in Pakistan raised slogans against Khan and his party Pakistan Tehreek-e-Insaf while demanding a retaliatory strike by their armed forces. Also Read - Pakistan Approves Russian COVID-19 Vaccine Sputnik V For Emergency Use

As many as 12 Indian Air Force Mirage 2000 jets crossed the Line of Control (LoC) in the wee hours of February 26 and bombed Pakistan-occupied Kashmir’s (PoK) Muzaffarabad, Chakoti areas and Balakot region in the Khyber-Pakhtunkhwa province of Pakistan- that harbour Jaish terrorists. Balakot is 80 km from the LoC and near Abbottabad, where Al Qaeda chief Osama Bin Laden was killed by US forces in 2011. Also Read - Secret Tunnel Used to Infiltrate Terrorists From Pakistan Detected in J&K's Kathua | Watch

According to reports, during the National Assembly proceedings in Islamabad, former Pakistan defence minister Khawaja Asif urged all parties to put up a ‘united front’ against India.

Meanwhile, India confirmed that the IAF conducted an intelligence-based defensive strike. “This was an intelligence-based counter terror strike not a military action for the sake of war. Have demolished the entire terror set up in the suicide bombing training centre in Balakot, and over 300 terrorists were eliminated in the covert operation by IAF.” 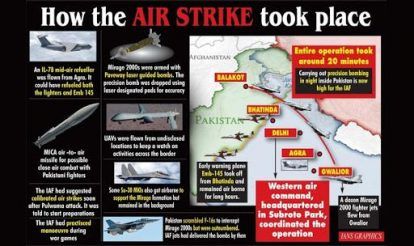 The three attacks were carried out in Balakot, Chakothi and Muzaffarabad at 3.45 am, 3.48 am and 3.58 am respectively.

Following this, Pakistan PM Khan chaired a high-level meeting attended by all chiefs of all armed forces.  “Forum concluded that India has committed uncalled for aggression to which

Pakistan shall respond at the time and place of its choosing,” read a statement released by the Pakistan PMO after the meeting.

Speaking to the media, Pakistan Foreign Minister Shah Mahmood Qureshi admitted that IAF jets entered its airspace and added that this action spoke of India’s hurried reaction at time of its general election. He also added that Khan had ordered the armed forces to prepare for any eventuality.