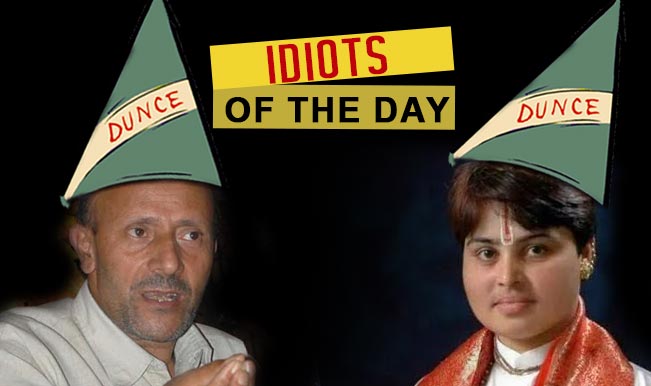 There’s one underlying characteristic that unites all public figures in our grand nation – the propensity to make stupid comments. Today’s geniuses are All India Hindu Mahasabha’s Sadhvi Deva Thakur and J&K MLA Engineer Rashid who prove that idiocy knows no religion or ideology. Also Read - Hindu Mahasabha to Launch YouTube Channel on Nathuram Godse to Tell Youth About 'Good Work' Done by Him

Sadhvi Dera Thakur, the vice-president of the All India Hindu Mahasabha gave all Hindus a bad name by saying: ‘The population of Muslims and Christians is growing day by day. To rein in this, Centre will have to impose emergency, and Muslims and Christians will have to be forced to undergo sterilisation so that they can’t increase their numbers.’ She also told Hindus to have more children, and demanded that idols of Hindu gods and goddesses be placed in mosques and churches. Also Read - Rahul Gandhi Should be Put Under House Arrest For His 'Irresponsible' Remarks Over Border Issue: Swami Chakrapani to PM Modi

On the other hand, Jammu and Kashmir MLA, Engineer showed us that it’s not only the far-right that can come up with stupid comments. Rashid actually said that Kashmiri Pandits must apologise to the majority community (of the state) for leaving them behind at the mercy of lawlessness. (READ: Hindu Mahasabha’s Swami Omji threatens to kill Arvind Kejriwal like Nathuram Godse killed Mahatma Gandhi)

Previous Idiots of the Day

‘Kashmiri Pandits must seek unconditional apology from the majority community for migration and leaving them behind at the mercy of guns, grenades, bullets, crack-downs, PSAs, AFSPA, custodial killings, rapes, murders, forced labor, custodial disappearances, humiliation and rule of lawlessness,’ the lawmaker was quoted saying.  ‘Let Kashmiri Pandits understand that they should not have left the valley under worst circumstances, had they been real Kashmiri nationalists. Let Kashmiri Pandits not seek return like tourists but should return to live and die with Muslim brothers under all eventualities,’ Rashid added. No wonder Twitter hit back with the hash tag: #DimwitRashid.