‘Ik Mauka Bhagwant Mann Nu’: With 93.3% Strike Rate, Will The Comedian be Able to ‘Stand Up’ to Punjab’s Expectations?

Punjab Elections 2022: Two-time MP from Sangrur Bhagwant Mann, who is famous for his sharp one-liners, has garnered the overwhelming support of 93 per cent of respondents who favoured him as the party’s CM candidate.

New Delhi: Effortless, Empathetic, and Impassioned—meet comedian-turned politician Bhagwant Mann who took a grand entry in the forthcoming Punjab Assembly election 2022 after Aam Aadmi Party (AAP) announced his name as the party’s chief ministerial face. Two-time MP from Sangrur, Mann, who is famous for his sharp one-liners, has garnered the overwhelming support of 93 per cent of respondents who favoured him as the party’s CM candidate.Also Read - Punjab Assembly Election: Bhagwant Mann to be AAP's Chief Ministerial Candidate in Upcoming Polls

Unlike other political parties, AAP convener and Delhi Chief Minister Arvind Kejriwal had launched the “Janta Chunegi Apna CM” drive, wherein people were asked to name their choice for its chief ministerial face for the February 20 polls. Kejriwal claimed that the party has received nearly 22 lakh responses and Mann, who is considered as AAP’s biggest crowd magnet in Punjab has taken a massive lead over the rest.

“Out of 21.59 lakh votes received, many people included my name. I had earlier said that I am not in the race. We declared those votes (naming Kejriwal) as invalid. Out of the remaining, 93.3 per cent of people named Sardar Bhagwant Mann’s name. On the second slot was (Punjab Congress chief) Navjot Singh Sidhu, who got 3.6 per cent votes, Kejriwal announced following which the hall erupted in cheers.

Addressing Mann as his Chota Bhai (younger brother), Kejriwal hugged him and exuded confidence that the person chosen as AAP’s Chief Ministerial candidate will be the next CM of Punjab.

Bhagwant Mann: Will The Stand-Up Comic Be Able to ‘Stand Up’ to Punjab’s Expectations?

In 2019, Volodymyr Zelensky took everyone by surprise after he was elected as the president of Ukraine. Zelensky had made his name with  Servant of the People, a Ukrainian comedy show. Similarly, Bhagwant Mann first tasted success with the Great Indian Laughter Challenge in 2008, wherein his current arch-rival and Punjab Congress chief Navjot Singh Sidhu was a judge. Like Zelensky, Mann too had been embroiled in many controversial in the past which has raised many questions on the Aam Aadmi Party’s decision.

Stating that the Kejriwal-led party has committed a mistake by making Mann its CM face, Shiromani Akali Dal (SAD) president Sukhbir Badal said that people of Punjab can not repose their trust in Mann. “Punjabis are not so naïve and could see through the designs of AAP. They want a strong and decisive leadership who can plan for the future”, Badal told Times of India. 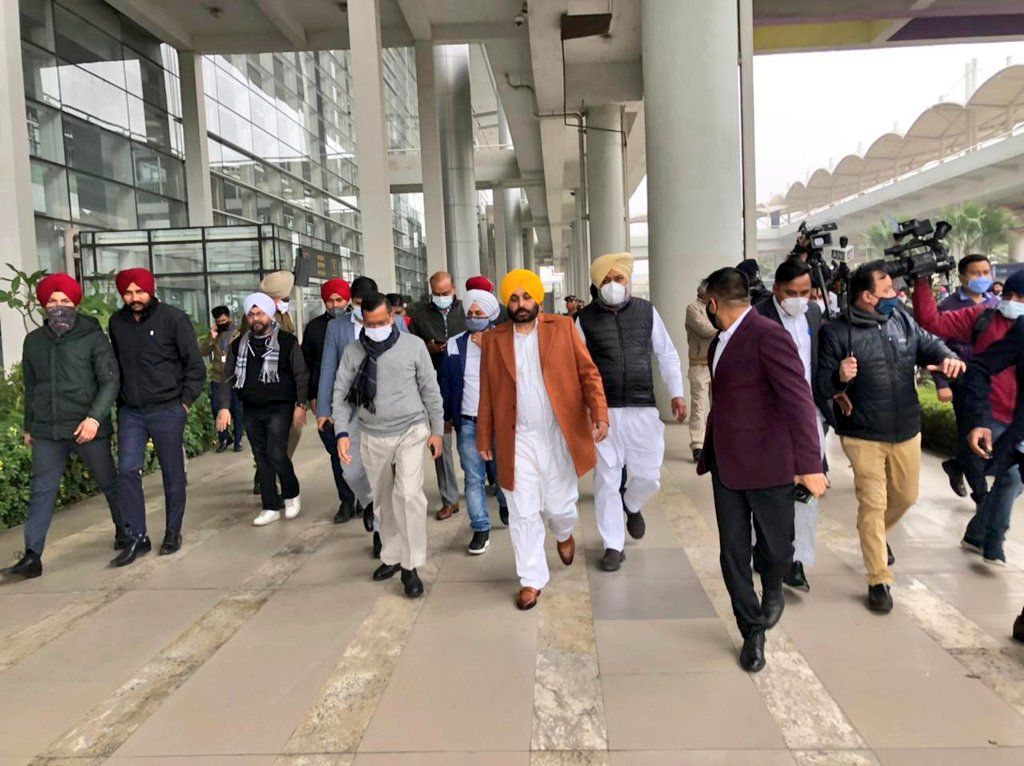 One Name, Many Contentions

Mann had landed himself in trouble in the past with several controversies, particularly associated with alcoholism. He was accused by his detractors of coming to political gatherings in an inebriated state. A video of the former comedian had gone viral  in 2015 wherein he was seen taking part in a condolence meet in an inebriated condition.

In 2019, in his new year resolution, Mann had vowed to not consume liquor and work from the people of Punjab. However, both Congress and BJP have accused the AAP leader of not keep up to his words.

But in the same year, another video of the Sangrur MP was widely circulated on social media in which he was allegedly seen speaking under the influence of alcohol.

However, recently at the Mohali press conference, Mann said people don’t laugh when they see his face now. “Now, it is completely reverse. When I go to any public meeting or any meeting, people now cry when they look at my face while narrating their problems and saying save us, we are ruined, our children are in bad company,” he claimed.

A Look Into Mann’s Political Journey

Known for his outstanding oratory skills,  Mann began his political career in 2011 when he joined the Manpreet Singh Badal-led People’s Party of Punjab, which later merged with the Indian National Congress.

In 2012, he fought from the Lehra assembly constituency in Sangrur as a PPP candidate but lost to senior Congress leader Rajinder Kaur Bhattal.

In 2014, he joined the AAP and was contested against Akali heavyweight Sukhdev Singh Dhindsa for the Sangrur Lok Sabha seat. He won by over two lakh votes. The AAP itself went on to win four Lok Sabha seats in Punjab.

However, in 2017, Mann unsuccessfully contested the Assembly polls against SAD’s Sukhbir Singh Badal for the Jalalabad seat. But Arvind Kejriwal’s party won 20 seats in the 117-member Punjab Assembly, ending up as the state’s main opposition party.

Mann was made its state unit chief. In 2018, he resigned from the post after Kejriwal apologized to Akali leader Bikram Singh Majithia in a defamation case. But in 2019, he returned to the party with the same post. Mann won the Sangrur seat again in the 2019 Lok Sabha polls with a margin of over one lakh votes.

Punjab Elections | A Look Into Past

In the 2017 Punjab Assembly polls, Congress won 77 seats in the 117-member House, whereas Shiromani Akali Dal could win only 18 seats. On the other hand, AAP emerged as the second-largest party with 20 seats.

In the 2012 Punjab assembly polls, the SAD-BJP alliance ended up surprising the poll pundits. For the first time in over two decades, an incumbent government in Punjab succeeded in defying the anti-incumbency in polls.